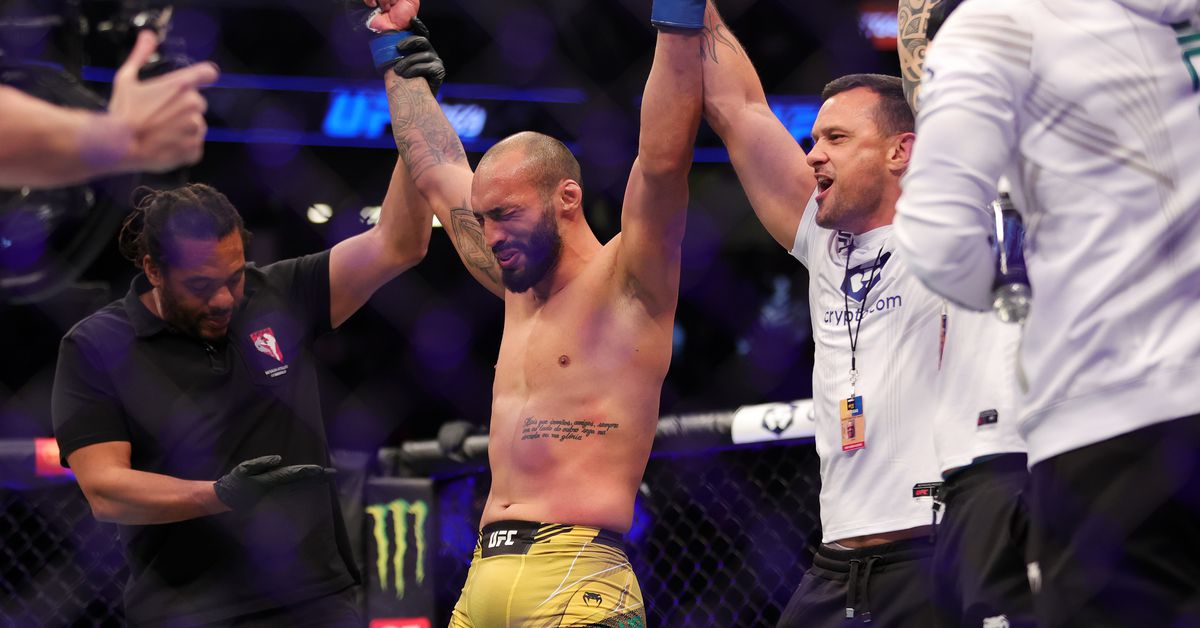 Bruno Silva is one of the most intriguing up-and-comers in the UFC after shutting the light out of his first three opponents inside the octagon — and his highly-anticipated UFC Vegas 50 clash with Alex Pereira comes a decade after he nearly ended his MMA career.

Back in 2012, Silva was a 22-year-old newcomer with a middling professional record of 5-5, with four of those defeats coming by way of first-round submission. Silva was struggling to keep a routine of training in Cajazeiras at the time. The city is so small, its entire population can fit into an arena. UFC attendance records are barely broken.

It was almost impossible for Silva to make a career in MMA back then.

“I had to work and study because I couldn’t make a living through fighting,” Silva explained on a recent edition of MMA Fighting’s Portuguese-speaking podcast Trocacao Franca. “It’s a small town and there was no MMA there. I ran on the street. I worked as a security guard all day and trained at 10 p.m., and started running at 1 a.m. People called me crazy, they said I wanted attention, that I was doing drugs.”

Silva started with mixed results. He won as much as he lost, then a couple of quick submission defeats in the Northeast region of Brazil in 2012 made him consider finding a different career path entirely.

“I had already decided I would stop fighting in 2012 because I had no team, and my coach had just left [the city],” he said. “I was training with two friends, and one of them taught me not to get taken down and beat them up on the feet.”

Silva wanted to try it again, so he relocated to Joao Pessoa in order to train at a gym. After scoring four straight first-round knockouts, he landed a spot on the third season of The Ultimate Fighter: Brazil as a heavyweight. Unfortunately for him, eventual TUF Brazil 3 finalist Vitor Miranda was the man standing across from him for the elimination round bout.

“I was only fighting for four years when I was paired up against Vitor Miranda,” Silva said. “I was a kid amongst a bunch of lions. I was fighting people 65 pounds heavier than me. Since I didn’t have a gi, I was not even a white belt. Vitor Miranda was feared by many, and I was among the most fearful. Vitor was one of the few people I hit and couldn’t shut off, and he knocked me out in the end of the second round.

” I have never fought outside the Northeast, and now I am fighting Vitor Miranda straight away. Another person would have died there. I was scared s***, but I stood with him. Thank God for that great fight. It changed my entire life. I was inspired by the fight to go to Curitiba to learn at Evolucao Thai. After that .”

Silva won six in a row as an Evolucao Thai fighter under the tutelage of Andre Dida, an assistant coach of Wanderlei Silva’s TUF Brazil 3 team, but came up short in his first international bout, losing to Moise Rimbon in Lebenon a few months after being considered as a late-notice replacement for Anderson Silva against Uriah Hall at UFC 198.

Another win in Curitiba propelled Silva to international waters. However, Dida opposed the idea of traveling to Russia to meet Gennadiy Kolalev.

“Brazilians were only getting beat up in Russia at that time,” he said. “Only one or two would win, and that’s it. But Russia was the only option for me. I went to Chelyabinsk, [it was] -20. 2 [degree Fahrenheit]. That was insane. It was madness, but I went and did my best. Mike Tyson was there [in attendance]. Fedor [Emelianenko] was there. They were my opponents.

” Several Brazilian fighters said that they only went there to make money. They were paid $4,000, enough money to make ends meet for six months or so [in Brazil]. I said, ‘No, man. I will be the Trojan Horse. I spoke to Dida, and he refused to let me go. I said, ‘Dida, let me go, man. If I lose, you can cut me from Evolucao.'”

Silva saved his spot in the Evolucao Thai team by stopping Kovalev in the opening round, which set up a bout against Russian star Alexander Shlemenko, who had just lost to Gegard Mousasi in Bellator after rolling through a seven-fight unbeaten streak.

“Their plan was, ‘Let’s bring Silva, this average guy, to get beat up by Shlemenko, so Shlemenko goes back [to Bellator] to fight Mousasi or [Rafael] Lovato for the title. Shlemenko was the favorite — and I knocked him out in Russia. And that’s when I met ‘Minotauro.'”

Another UFC champion and PRIDE heavyweight champion Antonio Rodrigo Nogueira worked as an ambassador in Brazil for UFC when he noticed potential in Brazilian middleweight.

“‘Minotauro’ saw me at UFC Sao Paulo and said, ‘Man, I admire you a lot. I’m a fan or yours,'” Silva said. “I was nervous because i was a fan o ‘Minotauro’, and then suddenly this guy comes up saying that he is my fan. “He said that he would like to see me at the UFC. I replied, “Look Minotauro. I will only go to the UFC if I am crowned champion in Russia.”

“He said I was crazy, that Russia only had tough fights. But I said, ‘There’s an undefeated guy there, [Artem] Frolov, and beating this guy would give me a lot of money and would make me the first Brazilian champion at M-1 Global. It’s my goal to make Russian history.

“Fighting in Russia is still tough,” Silva continued. “Only two of 10 Brazilians that go there actually win. It’s heavy. The flight is long. My baggage was lost the first time I traveled there. I had to stay for three weeks in the same clothing, losing weight at the hotel. It was almost impossible to lose weight. I only had a treadmill and a sauna and food was crazy.

“They give you this weird look everywhere. You’re clearly going there to get beat up. It looked like a horror movie. When I arrived, it was snowing. My friend said that it reminded him of The Walking Dead .. The truth is, it did. Nobody in the streets, that white snow and the black road. If you don’t have a good mind, you lose before the fight. It’s crazy.”

Silva ultimately stayed true to his word — he dethroned Frolov by knockout in the fourth round to clinch the M-1 Global 185-pound title and finally earn a deal with the UFC.

” That’s what I’m most proud about,” Silva stated of his Russian run. I took the difficult path to get into the UFC. I fought everybody in Brazil. I fought in Lebanon and lost, went back to Brazil and fought, went to Russia and knocked them out, and went to the UFC. Two years later, I was banned from the UFC for doing something that I did not do. I came back, knocked out three guys in a row.

“What I love the most is to hear that I’m ‘Blindado from Russia’. Or the ‘Nightmare of the Russians’. If I had gone to the UFC before going through Russia, I don’t think it would have been good. UFC gives you this glamour and people get deceived with praises and Instagram followers and feel the pressure of fighting in the world’s biggest promotion. I don’t .”