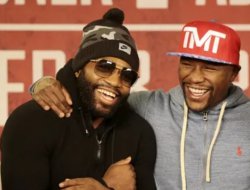 The legendary Floyd Mayweather (50-0, 27 KOs) was called to an exhibition fight by his former protege Adrien Browner (34-4-1, 24 KOs). The brawler, who either thumps, then corrodes one and a half times, then sniffs something, then experiences nervous breakdowns, then swears that he is done with all this and now it will be hoo, once again put forward such an idea in a podcast
Round Da Way.

“In the last few years that Floyd spent, he received hundreds of thousands, well, millions, up to an eight-figure amount, probably held out. But if we arranged a fair fight with him, then we would have to give 100 lyams each, ”the American is getting rich in thought.

The man raised the stakes slightly, because in the summer he called Floyd in the same way, but only for “$100 with dashing millions” for two.

Broner promises to be an absolute

Browner, a former four-division champion, came under Mayweather’s wing early in his career and was once regarded by certain observers as heir to his throne. But the lack of consistency and discipline outside the ring cost Broner a big (and profaned) opportunity.

It’s been a few years since these two have separated for some reason.

Adrian, 33, is set to return on February 25 against Ivan Redkach, 36, who hasn’t fought since February 2021. The last time an American entered the ring at the beginning of 2021, he controversially beat the middle peasant Giovani Santiago, which even got us sick: Yes, that’s it. Enough.

And Floyd, 45, wants to host another boxing show in February in the UK; against whom – it is not known, and it is not particularly important. Since leaving the official sport, Mayweather has already held five exhibition “fights”.

You are aware that Adrian considers himself “not just an elite, but one of the greatest in the history of boxing.”