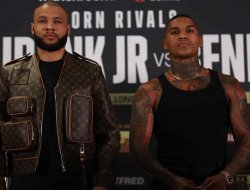 As we reported earlier, Benn failed a doping test for clomiphene, a substance on the World Anti-Doping Agency’s banned list that is commonly used to treat infertility in women.

However, after consulting with experts, Eubank’s side and Chris himself decided to fight anyway.

The matter remained only with the main sanctioning body – the British Boxing Control Council (BBBOC). And yet (?) He does not give a duel.

Today, VVVOS released its verdict on the current situation:

“On the evening of October 4, 2022, the BBC Council decided that the fight between Chris Eubank Jr. and Conor Benn, scheduled for October 8, 2022, is prohibited from taking place because it is not in the interests of boxing. This was reported to boxers and promoters on the morning of October 5, 2022.”

Considering the desire of representatives of both boxers to fight, we do not put an end to this story yet and continue to monitor the development of events.

Moreover, Chris Eubank Jr. promises to end his career if he loses to Benn on Saturday.