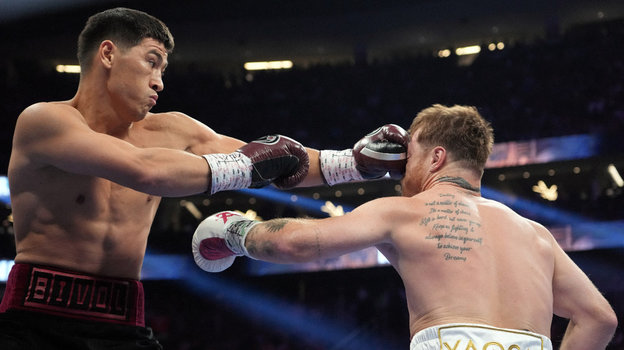 Mexican superstar Saul Canelo Alvarez (57-2-2, 39 KOs) threatened to reach the heavyweight and take away all the titles from the unified world champion Ukrainian Oleksandr Usyk (19-0, 13 KOs), but did not even manage the holder of the WBA Super belt, Russian light heavyweight Dmitry Bivola (20-0, 11 KOs) – lost by unanimous decision.

Now the Mexican insists on an immediate revenge. Interestingly, such a clause is spelled out in his contract.
Bivol argues: “For me, this, of course, is an opportunity to earn solid money and even more respect. You know, it’s not surprising that he demands a rematch immediately after the fight. If you have not moved away from the fight, then you are a little out of your mind, you are always carried away. I wouldn’t be surprised if he changes his mind a little later.”

“After the fight, you are ready for anything – even beat Anthony Joshua. ‘Cause you’re still in the fight, you’re excited, your blood is churning. But then you calm down, pull yourself together and start to think: “Maybe this is not my weight. Or is it mine? Do I need a revenge? Or is it better to go back? ” So there is nothing surprising in his decision immediately after the fight to demand a rematch. He’s not just anyone, but a champion in four weight divisions. Understandably, he wants to get even. At what weight? Well, I don’t mind fighting for his 4 belts in the second middle division, because the title of absolute champion is my goal, ”said Bivol.

The Russian was great at controlling the distance during the fight, jabbed smartly. The champion argues: “A jab in boxing is like wheels in a car. You won’t get far without it. This is the most important punch in boxing. This fight finally introduced me to the boxing fans. I proved that I’m better than Canelo. And I’m ready to do it in revenge. Yes, it is much more developed. But I’m better. And in a rematch, I can box even better, even harder.”

Mike Tyson called out Canelo’s mistake yesterday and gave advice on how to beat Bivol in a rematch. And the winner calls “not to evaluate boxers by media.”