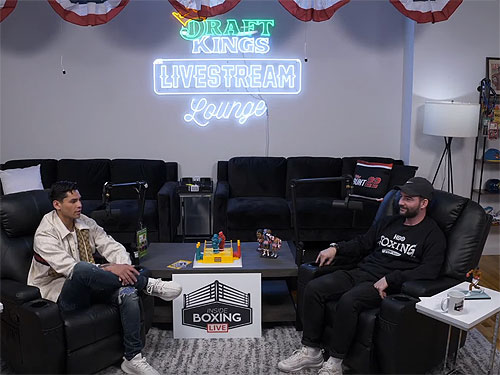 Prospect of the light weight category (up to 61.2 kg) American Ryan Garcia (22-0, 18 KOs) had a conversation on the YouTube channel “JM Boxing”.

AT
interview Ryan expressed his opinion about today’s light heavyweight fight (up to 79.4 kg) between the WBA Super champion Russian Dmitry Bivol (19-0, 11 KOs) and the absolute champion of the second middleweight (up to 76.2 kg) Mexican Canelo Alvarez (57- 1-2, 39 KOs).

From his own experience, Garcia predicts a tough fight for the Mexican, and in Bivol he sees a young version of the former hegemon of the light heavyweight division, Russian Sergey Kovalev (34-4-1, 29 KOs).

– We have a big fight this week – Canelo Alvarez – Dmitry Bivol. Tough fight for Canelo. You spent a lot of time with him. I don’t want to get too deep into what happened between you two. This has already been written about. It’s all over, right?

– Yes. This is the past, we are moving on. If we talk about the fight, put all the emotions aside… If Canelo loses, it will be in this kind of fight. I can say this because I saw him in sparring, in fights. This style, it’s not the best for Canelo. Anyone with a great jab, very good technique and size will give him a little trouble.

I will say that this is the most difficult fight for Canelo after Golovkin.

“I have always said that the way to beat Canelo or thwart his plans is you have to have the number of punches… Golovkin threw 70 punches per round. There must be strength. Obviously, Golovkin has it. And there should be a good jab. Bivol doesn’t throw 70 punches in a round, but he’s big, he has pretty good power and a very good jab. I see how maybe the first 8 rounds will go like a fight with Kovalev. Canelo will give rounds, will be inactive, will try to calculate it. But Kovalev only threw punches, he did not try to invest in them.

– Here’s one more thing. Canelo doesn’t have many assists. If you’ve seen him in a fight, he’s sort of running in one gear in the hope that the guy will crack from the pressure. In fact, he does not have such a serious pressure. It’s just that he makes you miss a lot, because he dodges, smears punches, continuing his aggression on an ongoing basis. The way to defeat him is when the fighter is very active. Kovalev… He didn’t invest in punches, he just threw a lot of small punches. And Canelo could not get rid of them, although in the end he found him with a left hook.

But that’s why I gave this example of a fight with Kovalev. Because for me Bivol is a young Kovalev. And he is very fast and more aggressive now than Kovalev was. For me, this is a 50-50 fight. No offense, I don’t say it on purpose. But if you look at the fight from this side, it will be close. But let’s see.

Like a horse with a hoof. Khan reveals the secret to Canelo’s punching power

“I see Canelo stopping him at the end of the fight with a body punch. Bivol is higher, the number of punches thrown by Canelo, the way he works the body…

He makes his opponents feel like they can’t shake him. No one. They just don’t believe in their punches when they’re up against him. And his defense… They think, “Even if I throw a punch, it won’t have any effect at all.”

Have you sparred with him?

“We sparred once, but it’s obvious that he weighs more than me, he didn’t throw his strongest punches. I had the speed factor.

Who do you want to see him fight? They said at the press conference that he was avoiding Charlo, avoiding Benavidez…

“This is the best fight for him. Here are his fights: he has Golovkin again, he has Benavidez and he has Charlo.