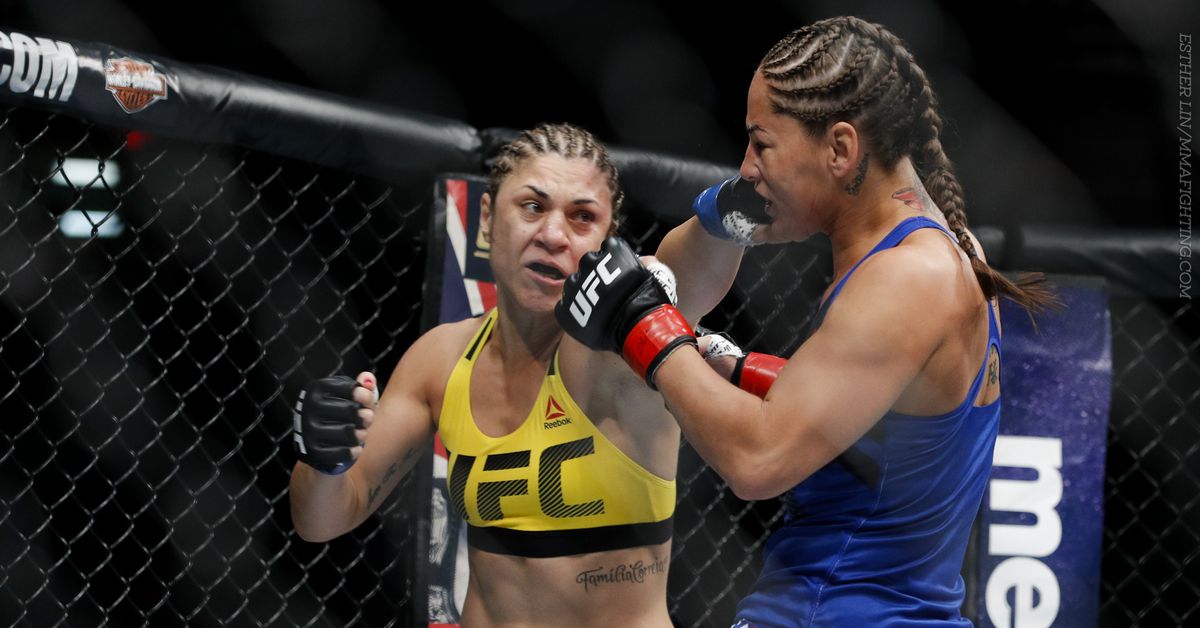 Bethe Correia walked away from MMA in 2021 and is happy with her decision. Yet she’s still open to competing in other forms of combat sports.

Correia once challenged Ronda Rousey to UFC gold in Brazil. She has beaten Sijara Eubanks, Jessica Eye and Shayna Bazler in MMA over her nine-year career. She admits it’s hard to fully accept that part of her life is now over when she’s still surrounded by athletes as a gym owner in Brazil.

“I don’t think the penny has dropped yet,” Correia said on this week’s edition of Trocacao Franca. “It’s still crazy. I still think at some point I’m going to get a call to book a fight [laughs].”

Correia said there’s no way she will ever return to MMA because she “couldn’t take anymore” the pressure and misery to be in a training camp.

“I felt physically well, but I think it was more of the mental [aspect],” Correia said. “A time comes when you can’t take it anymore. I think 90 percent of the athletes that stop fighting MMA do it because of the psychological pressure. We always think we can do it, that our bodies are conditioned to fight, but it’s such a psychological torture, it’s not fun anymore. MMA can become dangerous when it reaches that stage. You can have an irreversible injury.”

Correia said that training for UFC fights became “torture” after a main event loss to former champion Holly Holm in Singapore. She has since suffered several issues with her eye, twice undergoing surgery. One of her UFC fights was cancelled due to eye issues.

“Training was no longer enjoyable,” Correia stated. “I couldn’t stand people demanding me high performance and doing everything perfect. I got more sad than happy [after training]. In the past, I saw it as a challenge. ‘I’ll be better tomorrow, I’ll train better tomorrow.’ Then I started going home sad, had no desire to train, and that’s bad. It’s not enjoyable for you when you reach that stage.

“I was afraid of injuring my eyes again and having to undergo surgery one more time. I was worried about my eyes [more than anything] while training. The problem isn’t the fight, that’s only 15 minutes. The problem is training hard every single day.”

Preparing for a MMA fight requires physical conditioning and sparring, plus knowledge and training in specific martial arts such as muay Thai, kickboxing, boxing, jiu-jitsu and wrestling, and Correia wants no part of that. However, she is willing to compete in any of these formats again “later this season

“I wanna compete, but not in MMA,” Correia said. “I’ve received many offers from boxing, but let’s all calm down [laughs]. I just declared [my retirement from MMA]. Who knows, maybe I’ll compete somewhere, but MMA, [I’m done] forever.”

“I’m not afraid of bare-knuckle boxing because the UFC gloves, I always chose the smaller ones,” she continued. “It’s nothing. It doesn’t change much, I think. Because is not protected , I often see women leaving the gym with injuries to their hands. However, I’d like to experience traditional boxing. I would like that adventure. Maybe I will have fun with both. The best [wins]. offer I think that’s very interesting.”