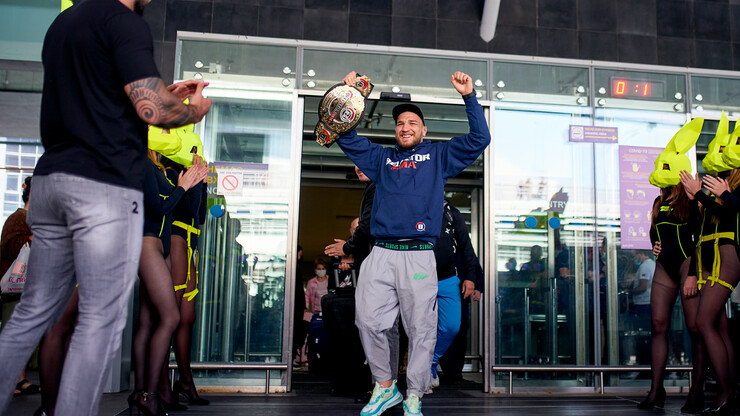 On Monday morning, June 14, Yaroslav returned with his team to Ukraine. The champion at Boryspil airport was met by friends, relatives, journalists and the Parimatch team, which supported Yaroslav Amosov on his way to becoming a champion. The fighter was expected not only to embrace relatives and friends, questions and interviews from journalists, but also a special gift.

The Parimatch brand and the Mahatch federation of fisticuffs presented the Bellator champion with a specially branded motorcycle, on which the inscriptions “Champion” and “26-0” stand out clearly – the MMA record of an invincible Ukrainian. Yaroslav has repeatedly admitted in his interviews that he loves motorcycles and extreme sports, so the gift came out symbolic and pleasant. The BMW M1000RR 2021 superbike is the latest motorcycle model, in addition, it is unique – this is only the 3rd copy in Ukraine.

“The victory of Yaroslav Amosov at such a level and winning the Bellator championship belt is an incredible achievement not only for the world of martial arts, but for the entire Ukrainian sport. Parimatch and Yaroslav have come a long way together, but this is only the beginning of outstanding achievements.

The company began to support the Ukrainian fighter long before his championship, because he understands how important it is to help talented athletes and provide them with comfortable conditions for further development. Together we are progressing and expecting new peaks, because we are charged only to win,” congratulated Yaroslav and handed him the bike, the head of the “Mahatch” project Andrey Limontov (official sponsor – Parimatch).

Amosov was immediately surrounded by representatives of TV channels with cameras and hundreds of questions, children took pictures and collected autographs on memorabilia. The champion showed his belt to the public and, despite being tired, tried to answer all the questions of journalists.

“I’m very pleased to see everyone here this morning. Honestly, I did not expect that there would be so many people and the press. We did what we had to do – we won and took the belt. Thanks to everyone for the support, congratulations and an incredible gift. I also want to draw attention , if I had such an opportunity, to support fighters and athletes not only when they have reached a certain level, but also during the first steps. For us, this is very important,” Bellator champion Yaroslav Amosov shared his emotions.

After a long preparation for the battle, Yaroslav now has time to rest and have a family that is waiting for replenishment at the end of summer. And we are waiting for new fights and victories of the champion.