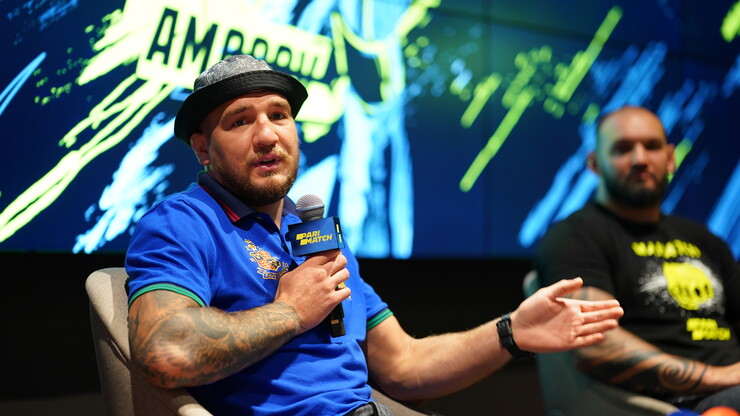 During his professional career, he spent 26 fights and won all of them.

Yaroslav is the first Ukrainian in history to win the title of a well-known promotion. He is also an undefeated MMA fighter – during his professional career he had 26 fights and won all of them. Amosov’s winning the championship belt did not go unnoticed in Ukraine, and hundreds of fans met Yaroslav at home. Amosov tried not to refuse anyone an autograph or a selfie. And after he had a rest, he came to the PM Hall, where he told reporters about his emotions after the victory and plans for the future.

“I have no words. First of all, I want to say thank you to those who supported me. In particular, the Parimatch company, which believed in me. Now they say a lot that I motivate the guys. I hope I will be able to do this in the future as well,” said Yaroslav Amosov.

Yaroslav also said that the meeting at the airport, where hundreds of fans were waiting for him and a gift in the form of a superbike, left no less vivid emotions than the victory in the championship fight. Amosov, in response to journalists’ questions, said that he was not making plans further than the contract with Bellator was calculated. He also asked not to compare him with Khabib Nurmagomedov, who owns the MMA record of 29 wins: “I am Yarik, he is Khabib. We are different”.

“Championship of Yaroslav Amosov is a great event for the whole of Ukraine. Today everyone is talking about his success, interest in MMA has grown in the country, our athletes see what they can strive for. Parimatch supported Yaroslav even before he won his title, and I hope our cooperation will be long and fruitful,” said Parimatch representative Andrey Limontov.

The manager of the Ukrainian fighter Andrey Spivachuk shared the secret that they are in talks with Bellator about a potential fight of Yaroslav Amosov in Kiev and that this option is real. The fighter himself said that he wants to return to the octagon closer to winter, because he is expecting the birth of his son and wants to devote time to rest and family.

Everyone is looking forward to new achievements and victories from the Ukrainian champion. How else? After all, he is charged to win!