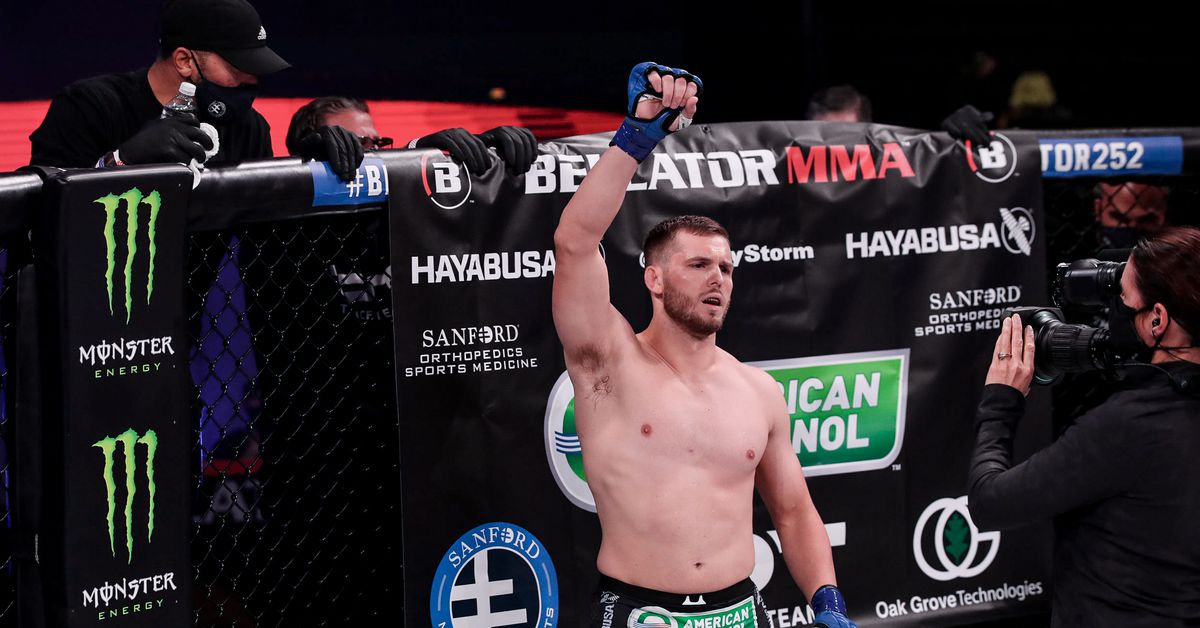 Some might disagree, but Logan Storley is the new interim Bellator welterweight champion.

Friday night at SSE Arena in London, Storley faced hometown hero Michael Page in the main event of Bellator 281. With welterweight champion Yaroslav Amosov currently in Ukraine defending his country from Russian invasion, an interim title was made for this fight. To the disappointment of many, Storley won the fight with gold.

“Venom” started the bout well, using his signature karate style to set a long range and pepper Storley with punches early. But the NCAA All-American was able to finally grab ahold of Page and get him down. Page was difficult to control and Storley had to stay on top of Page for the majority of the match.

This pattern continued in the second and third rounds, with Storley consistently getting Page down to the mat but failing to generate effective offense. Page did not do much better. However, Page started landing shots in limited foot exchanges, which caused some bleeding to Storley’s right eye.

In the fourth round, Page was finally able to avoid grappling exchanges for an extended period and as a result, he had his best round, but he still gave up a takedown late in the fourth. When the fifth started, Storley quickly went back to work with the wrestling, and this time, he was able to get Page down and hold half-guard for some time.

In conclusion, Storley won the majority of the fight but Page did the most damage. The judges did not choose to reward him for that, however, and Storley won a split decision with scores of 48-47, 47-48, and 49-46, to win his first world title.

The win moves Storley to 14-1 in his career and potentially sets him up for a title unification rematch against Amosov should the undisputed champ be able to return to the sport soon.

In the co-main event of the evening, Fabian Edwards secured the signature victory of his career, blowing the doors off Lyoto Machida in just over three minutes. Machida came out looking to use his signature footwork and movement to set a range, but Edwards simply did not allow “The Dragon” to get going and after an early clinch, Edwards rocked Machida with a nasty elbow on the break. Edwards continued to punish Machida with an aggressive left hand that dropped the ex-UFC champion, and some ground-and-pound, which turned his lights out completely. The win snapped a two-fight skid for Edwards and Friday’s fight is now the fourth loss in a row for Machida.

In a women’s flyweight bout, Kana Watanabe made a statement that she’s ready for a another crack at Liz Carmouche, submitting Denise Kielholtz in the second round. Kielholtz came out strong to start, hurting Watanabe early and then offering up some offense when she was taken down. The Bellator Kickboxing flyweight champion was unable to resist Watanabe’s grappling demands in round 2. In the end, Watanabe locked in a triangle choke about half way through the second round to secure the victory.

Paul Daley faced Wendell Giacomo in a main-card welterweight fight. It was what Daley believes will be his final MMA bout. Giacomo took down Daley and controlled him on the ground for the majority of the first and second rounds. Late in the second round, though, Daley was able to reverse position on the ground and as both men got up, Daley delivered a series of vicious punches against the fence, with a right hook finishing the job and face-planting Giacomo. It was a fitting end to Daley’s career, who walks away from the sport with a record of 44-18-2.

A fitting end for @Semtex_170 inside the Bellator cage. An explosive KO to end his 64 fight career! #Bellator281 LIVE on @SHOsports and @bbcthree pic.twitter.com/m65mnN7ThH

In the main card opener, Luke Trainer and Simon Biyong went to war for 15 minutes. Trainer was strong in the opening round. He was dominant with his grappling, almost winning the fight with a back-naked choke. The momentum changed in round two when Trainer was dropped by Biyong. He spent the remainder of the round destroying Trainer and trying to finish the fight. It was more of the same in the third, with Biyong again dropping Trainer and then going to work with ground and pound. Biyong was victorious in the final.

Check out the full Bellator 281 results below.

Coach Lemieux commented on the stoppage of the fight with Benavidez