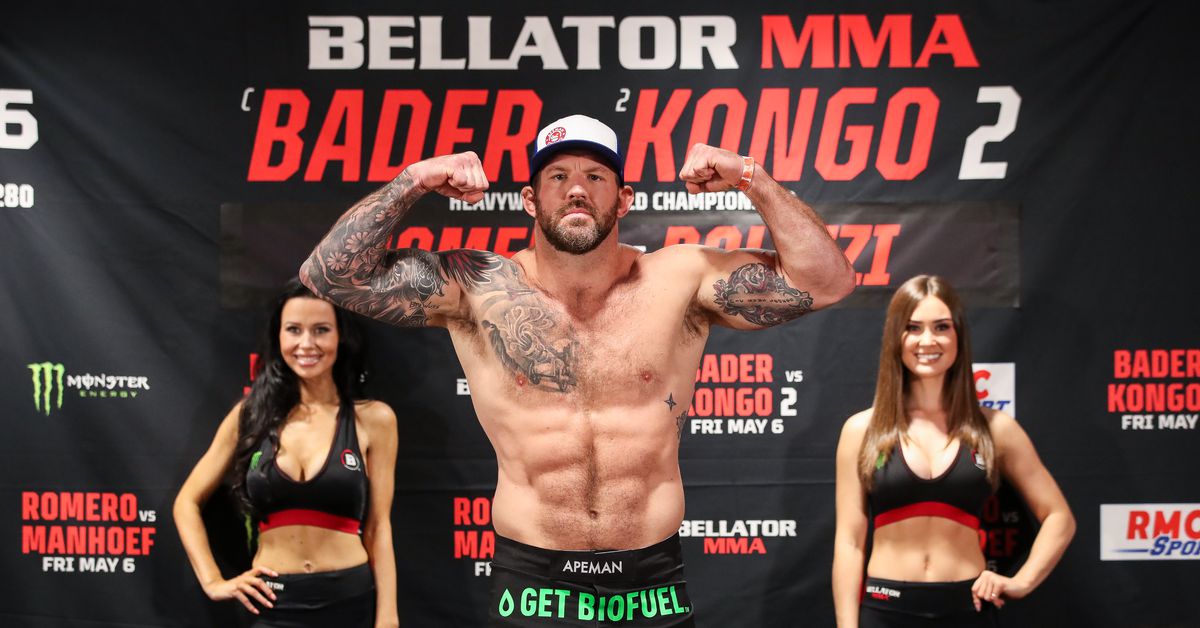 Ryan Bader did what he does best, and Cheick Kongo had no answer for it.

The two battled for the heavyweight title in the main event of Friday’s Bellator 280 card in Paris, a bout that served as a rematch of their Bellator 226 encounter that ended in a no contest after an accidental eye poke.

While Bader and Kongo battled in the clinch against the fence early, it appeared Bader landed a low knee and the action was stopped. The referee repositioned the fighters at the same spot after replaying the incident. Bader continued working for the takedown for almost the entirety of the round, controlling Kongo while landing knees to the thighs and midsection, much to the chagrin of the fans at Accor Arena.

Bader noticed Kongo’s aggressiveness in the second round, when he hit some huge shots. Moments later, Bader returned to the same position he was in throughout the first, pressing Kongo against the cage wall. The challenger tried to fight back with punches and elbows, but it didn’t seem to slow Bader down as the champion comfortably went up two rounds.

Bader kept the same game plan going into the fourth round, landing short punches and knees on the legs.

Bader was able to take down Kongo in less than one minute, despite Kongo needing the Hail Mary. With 90 seconds left, the referee stood it up and Kongo went on the attack. Just as quickly as that happened, Bader took the fight back to the fence, scored a takedown, and kept things consistent to close things out.

Alex Polizzi quickly realized that Yoel Romo was unlike any other man in the co-main card event.

Polizzi went for a takedown early, but Romero sprawled and landed a big punch almost in one motion. Romero scored with a trio of straight left hands that were his most successful strikes of the opening round. Polizzi tried to answer, but it was clear Romero’s power was more surprising along with the 45-year-old’s defensive quickness on the grappling end. Romero finished the round by a takedown, and two left hands against fence.

Romero smashed Polizzi in the second round before returning to his methodical pace. Romero kept scoring big straight lefts time after time, including one that dropped Polizzi. Polizzi was in a state of shock after the end of round 2.

In the third, Romero slowed things down, although he landed a pair of left jabs, and another powerful left hook that dropped Polizzi, plus a straight left that had Polizzi almost out on his feet before he finally put an end to the fight with one second remaining on the clock.

Davy Gallon now has five wins in a row after a one-sided destruction of Benjamin Brander in a lightweight matchup.

Brander was knocked down in round one by Gallon’s superior grappling. The 33-year-old was able to get into a crucifix position where he went on to land a slew of brutal elbows that sliced open his opponent. It was just three minutes into round two when the referee called it quits.

Lorenz Larkin didn’t need a lot of time to put away a fellow UFC veteran.

Larkin took on Kyle Stewart in a 185-pound matchup and “Da Monsoon” had Stewart on his heels right away. Stewart survived despite being nearly knocked out by Larkin. Larkin had Stewart again hurt less than one minute later. This time, he used a barrage o vicious knees and punches on the head to ground Stewart.

Following the bout, and his second straight win at middleweight, Larkin said he’s heading back down to welterweight and hopes to return quickly.

In the middleweight main card opener, France’s Gregory Babene fired the Paris crowd up with a vicious knockout of Mike Shipman.

Get full Bellator 280 results below: