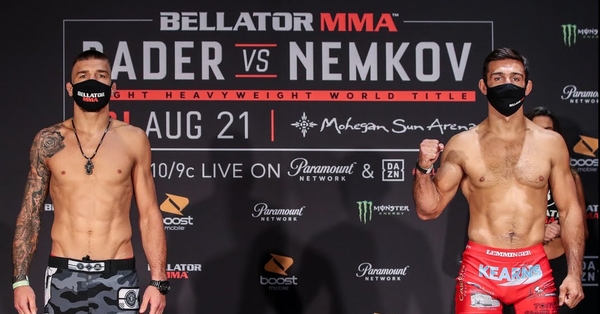 On the night of August 22, an undefeated Ukrainian fighter will duel in the USA

On the night of August 22, a tournament will be held at the Mohegan Sun Arena in Uncasville, USA Bellator 244.

In one of the fights, the undefeated Ukrainian welterweight Yaroslav Amosov (23–0) will oppose the American Mark Lemminger (11–1). The fight is expected at about 02:00 Saturday night Kyiv time.

26 year old Ukrainian Yaroslav Amosov originally from Irpen – one of the best Ukrainian fighters. He made his debut in MMA in 2012, has 23 wins without a single defeat. One of the most promising Ukrainian fighters started his career in MMA in 2012. World champion in MMA according to GEFC among professionals. For a long time he performed in the Russian promotion Tech-Krep FC, which was based in Krasnodar.

In 2018, Yaroslav signed with Bellator and won all 4 fights after that. He defeated Gerald Harris (July 2018) and Eric Silva (February 2019) by unanimous decision. On the Independence Day of Ukraine, August 24, 2019, he proved his superiority over David Rickels at Bellator 225 ahead of schedule by submission. Finally, in February 2020, in the main event of Bellator 239, Amosov defeated American Ed Root by decision.

27-year-old American Mark Lemminger in MMA won 11 victories and suffered 1 defeat. It is rather strange that this fight was put on the preliminary card. This fight should bring Yaroslav closer to the championship fight. It is desirable to deal with the opponent convincingly.

Prediction for the fight – early victory of Yaroslav Amosov.

Another Ukrainian fighter Vladislav Parubchenko will enter the octagon against John de Jesus.