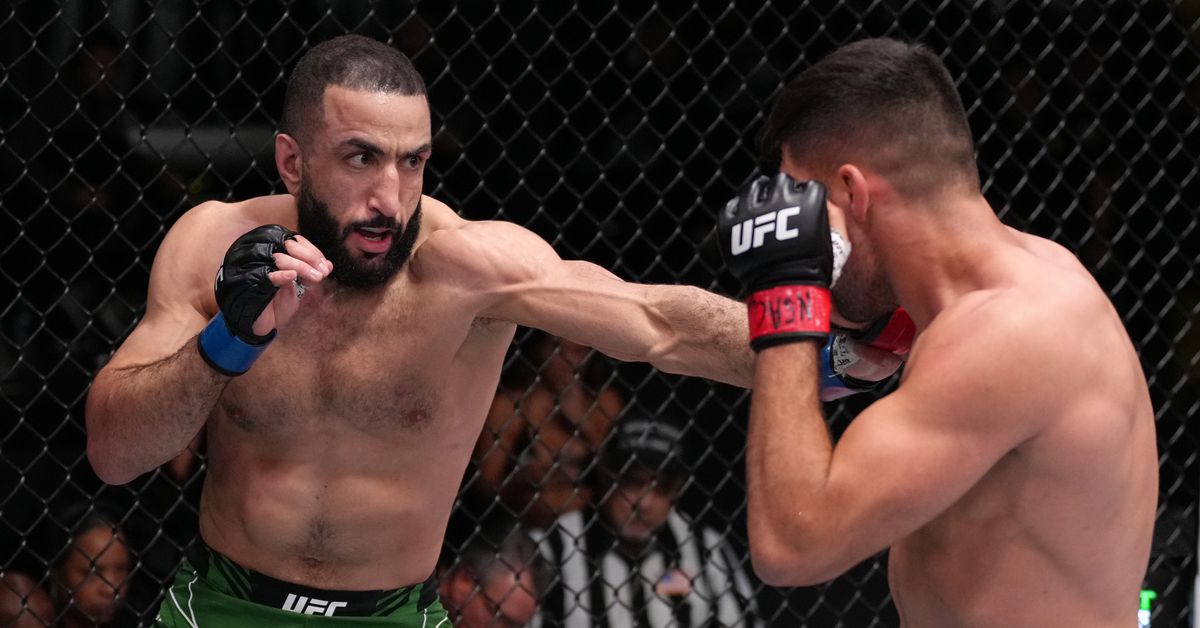 Belal Muhammad would welcome fights against either Khamzat Chimaev or Colby Covington next, but he only expects one to actually happen.

Fresh off a win over Vicente Luque at UFC Vegas 51, Muhammad has targeted a top-ranked opponent where a victory would ensure he receives a title shot. As much as he’s called out Covington, he believes a showdown with Chimaev is the more likely scenario.

While UFC President Dana White stated that he would like to have Chimaev face Covington in the future, Muhammad doesn’t believe this will happen.

“I tell people they’re like ‘oh well Khamzat’s going to fight Colby’ and I’m like Colby’s not taking that fight,” Muhammad told The Fighter vs. The writer . “Look who Colby is fighting, look who Colby is calling out.

“He is calling [lightweights]. Now that his tooth is broken, he’s probably going to be on the sideline for a couple of years until he gets some money from [Jorge] Masvidal.”

Covington had previously stopped talks of a Chimaev fight before and after his victory against Jorge Masvidal. A lot has happened since then: Chimaev vanquished one-time title challenger Gilbert Burns to make a huge leap up the welterweight ranks, while Covington dealt with a whole other kind of fight after Masvidal allegedly assaulted him outside of a restaurant in Miami.

Add to that, Covington previously has targeted former teammate Dustin Poirier as an ideal next opponent, which only further fuels Muhammad’s theory that he wants no part of Chimaev, much less any other ranked welterweight contender.

Muhammad is even more motivated to pursue Chimaev after some chatter that he received from Luque before his fight. If both win, there’s the possibility of title at welterweight.

“Khamzat was one of the trolls tweeting Luque knocking me out, so I have no respect for him,” Muhammad said. I’m ready to face him. That fight would mean a lot to me. It would be a great honor to beat someone like him, who everyone believes is untouchable and invincible. He had an amazing fight with Gilbert Burns. While I have nothing but respect for them both, I want to defeat him. He is the one I will never beat.

” I don’t want any excuses about the next man that I beat. They say that [Khamzat is] is still here and he will get the title shot next. If Khamzat beat Gilbert Burns, I was going to be stuck in that, ‘Well Khamzat should still fight [Kamaru] Usman next.’

“So now if Khamzat fights Colby and I fight somebody else, if Khamzat beats Colby, he’s getting a title shot before me. It would be easier to just fight Colby in five rounds, and the winner will get a title shot. It makes a lot of sense to me.”

Prior to the fight against Burns at UFC 273, Chimaev looked like an unstoppable machine just chewing through his competition with four finishes on his resume with his opponents landing just one significant strike combined against him. After taking a lot of pain from Burns, he finally won the fight.

Muhammad already had ideas about how he could beat Chimaev, but seeing the slugfest with Burns only deepened his belief that it’s a very winnable fight for him.

“This is what I expected from that fight,” Muhammad said. Gilbert is a good friend of mine, and I was happy to root for him. But I really wanted at least three rounds. I don’t care what happens, I just don’t want it to be a quick knockout on either side. Khamzat had a lot in me, and I was curious to find out more. Now we have a lot more tape. We can see the things now.

” When I trained for his London fight, when I believed I would be fighting him there, I had already seen tapes of him. I looked for openings. The openings I saw on those tapes were the same ones I saw in Gilbert Burns’ fight. I see a lot of openings. I think I’m very good at breaking down fighters and analyzing what it takes to beat those guys. There are many ways I can beat Khamzat .