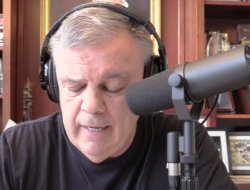 American coach and analyst Teddy Atlas is sure that British heavyweight Joe Joyce (15-0, 14 KOs) would have knocked out Anthony Joshua (24-3, 22 KOs) if these two punchers had fought. He spoke about this in his
podcastevaluating the performance of an unbeaten fighter in a duel against Joseph Parker.

The New Zealander was knocked out in the 11th round of a competitive fight. Atlas is sure the same thing would have happened to AJ.

“Joyce would have knocked out Joshua. It is too tough and strong,” said the expert. — Like it his [Джошуа] fans or not.

“This is Usyk.” Joyce Marked Target #1

Atlas also described in a peculiar way what happened in the fight between Joe and Parker: “It was like a cat fighting a dog. The cat scratched and clawed. But in the end, you know that the dog will “eat” the cat.”

“Joyce did a good job on the torso to soften up Parker. Yes, along the way, he ate a lot of big innings before finally breaking Parker, ”said Atlas.

But White is confident that he can knock out Joe Joyce.

Fury is heavier than Chisora, Berinchyk and Mendy have parity: results and video of the weigh-in in London