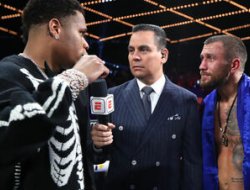 Promoter Bob Arum (Top Rank) confirmed that in the first half of 2023 there will be a fight for the title of absolute world champion in lightweight: the owner of all belts in the division, American Devin Haney (29-0, 15 KOs), will fight with ex-leader Vasily Lomachenko (17-2, 11 KOs), a native of Ukraine KO).

According to Arum, there is no date and place for the fight yet: “In fact, the fight is ready. We are currently looking for a venue and date. And as soon as we close these issues, the fight will be officially announced.

Arum admitted that the other day he met with Haney and his coach-father Bill – they discussed the date of the fight: “The fight will take place either before Ramadan (March 22 – April 20), or immediately after it. Since Devin is a devout Muslim, we cannot schedule this fight during Ramadan. Either before or after. This is exactly what we were talking about. But most importantly, they confirmed their readiness to fight Lomachenko.”

Where do you think the Haney-Lomachenko fight will take place? Turns out Devin has the answer. He seemed to be a little offended by the words of the promoter: “Lomachenko is a great master? For Arum, but not for me.”