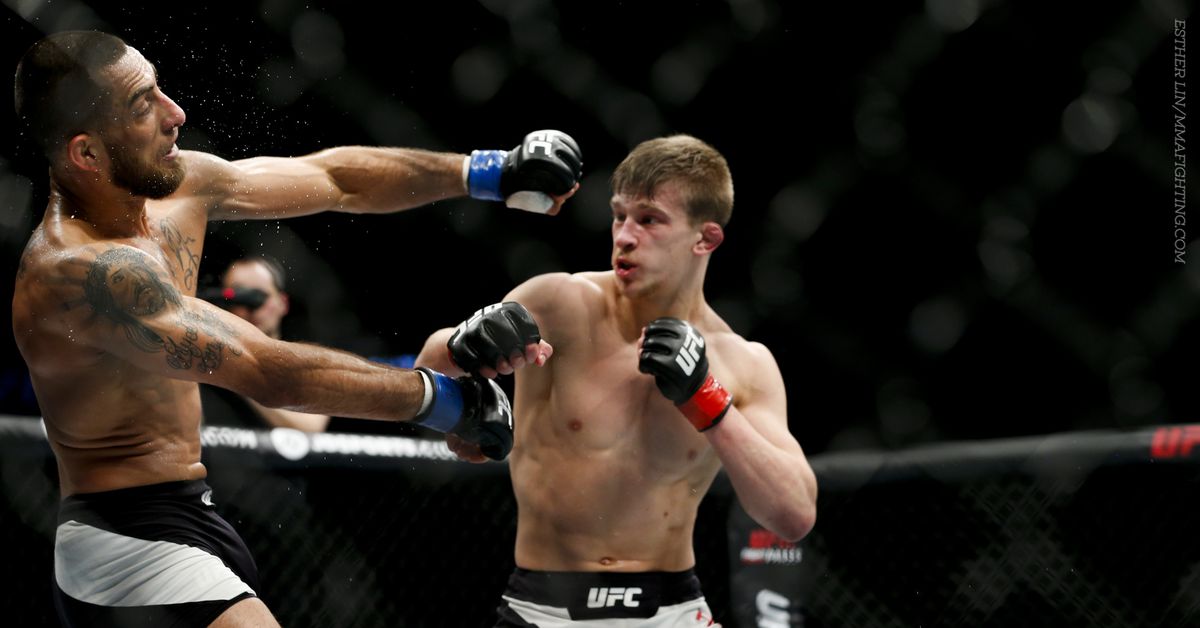 Arnold Allen, one of the most promising prospects in featherweight division is . He hopes to be a bonafide competitor in .

Currently, Allen is the No. 11 Featherweight in MMA Fighting’s Global Rankings. Allen has been undefeated since 2014, and holds a perfect 8-0 record within the UFC. This type of record would normally place someone on the brink of winning a title shot. However, Allen has been plagued by injuries and opponent substitutions that have prevented him from having the marquee name that could propel him to title contention. But with Allen now set to face Dan Hooker at UFC London, “Almighty” hopes to finally get himself into the title conversation.

“It wasn’t a surprise,” Allen said to The MMA Hour about Hooker. Dan Hooker is someone I have a lot respect for. I don’t know anyone that doesn’t. His challenges are immense. His wins include big names and has been there alongside the very best. So if I can’t prove myself here, I don’t know what fight will.”

It will be Hooker’s first fight at featherweight since 2016, however Hooker still is arguably the biggest name Allen will have faced in his UFC career. That’s why, when the UFC was looking for a featherweight to step in and challenge Alexander Volkanovski for the title after Max Holloway was forced out with injury last month, Allen didn’t even bother putting his name out there.

“To be honest, I saw all the people that were open to taking it and I was like, ‘I’m not gonna get it ahead of any of these guys,'” Allen said. “(My winning streak) means nothing. Saw that and was like, ‘Ah, whatever. Just keep doing what I’m doing.'”

Unfortunately, this situation did not help Allen’s hopes for his divisional goals. Following his win over Sodiq Yusuff last April, Allen was expecting to get get a matchup against Chan Sung Jung next. But when “The Korean Zombie” was tapped as the replacement for Holloway against Volkanovski, Allen then had to shift to Hooker.

Still, Allen believes that a win over Hooker is enough to finally get him over the hump.

“I was expecting Korean Zombie,” Allen said. “We were expecting something like that, but then obviously he got the call up for the title shot, so that’s off the cards. But I’m happy with the matchup. I think it’s a good one. If I get this win, it should be my chance to finally put me out there .

UFC London takes place on March 19 at the O2 Arena in London, England. The card will be headlined by a heavyweight matchup between Alexander Volkov and Tom Aspinall.