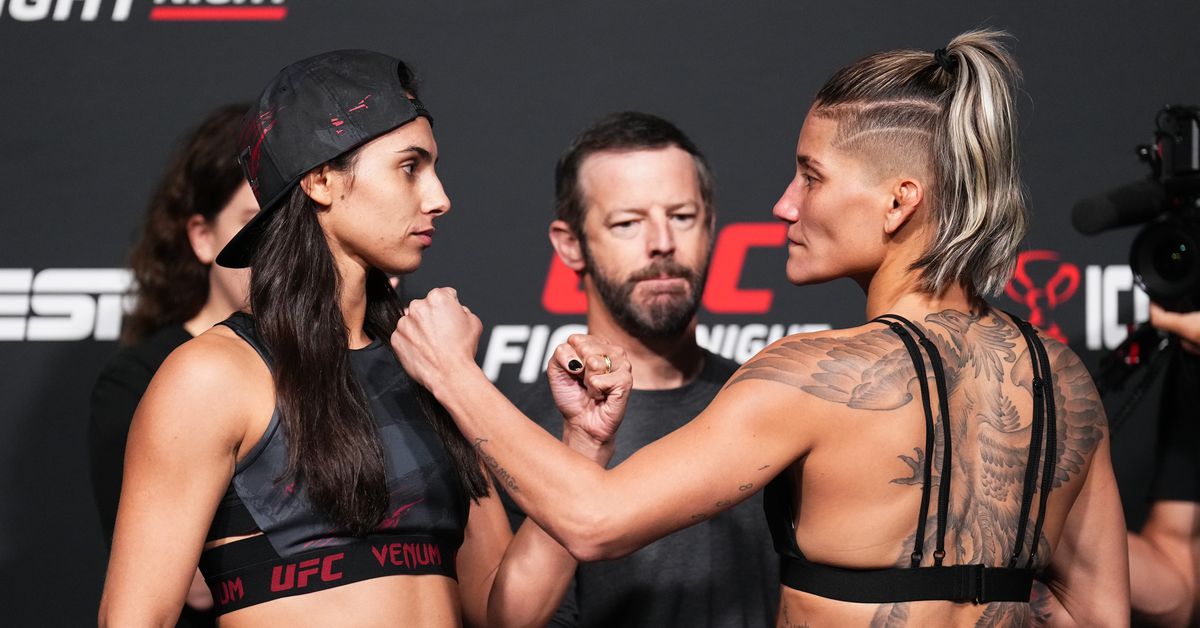 Dubbed “Queen of Violence” from the regional scene and her reign as a flyweight champion of KSW, Ariane Lipski has lived up to her nickname in flashes, like her vicious kneebar over Luana Carolina in Abu Dhabi. Yet one thing is still evading her in the UFC: a knockout.

“I don’t see [my lack of UFC knockouts] as a weight over me, because I had that kneebar that almost counts like a knockout,” Lipski, who on Saturday faces Priscila Cachoeira at UFC San Diego, said with a laugh on a recent episode of MMA Fighting’s Trocacao Franca. “It didn’t feel quite like a knockout, but am I going to complain? It was one of the best submissions of the year, and I made history with the first kneebar in UFC flyweight history.

“I want a knockout because I’m a striker and because it’s been a while since I haven’t won by knockout [in the UFC]. But I believe in timing. I don’t carry it as a weight. If it’s in this next fight or the following one, I believe it’s going to be in the right time, and it will be historic, it will be shocking, it will be exciting, and it will be perfect.”

Returning to action for the first time in 11 months after a decision victory over Mandy Bohm, which snapped a two-fight skid in bouts against Antonina Shevchenko and Montana De La Rosa, Lipski feels rejuvenated ahead of Saturday’s event.

Lipski vs. Cachoeira was originally scheduled for UFC Vegas 59 this past Saturday, but Lipski missed weight after dealing with health issues. A week later the bout was moved to San Diego at 135 lbs.

Cachoeira also had a rough start in the UFC with losses to Valentina Shevchenko, Molly McCann, and Carolina, but went on to win three of her next four, including two bonus-winning contests. Lipski stated that she doesn’t underestimate Cachoeira but hopes to keep her from getting into a standup fight.

“She gave some impressive performances at the UFC. But, I think my technique will win this fight,” Lipski stated. She’s a striking fighter, but she opted for takedowns during her last fight. I believe she’ll try to take me down, at least later in the rounds to score points. This is MMA and I am ready for anything. We can’t expect just striking or grappling.

“Winning is the most important,” she continued. She said, “I am always fighting and dreaming. I train hard to get my first UFC knockout. But I also focus on improving my skills as an athlete and being patient. I won’t rush things for a knockout or a submission. If I have the chance, I will take it. But I am determined to win every moment of this fight .”

Lipski claimed she had been scheduled to fight Cachoeira twice in her MMA career, but it never happened. First, Lipski was set to defend her KSW title against Cachoeira in late 2017, but “Pedrita” withdrew to sign with UFC and face Shevchenko. Lipski vs. Cachoeira then was announced for UFC Sao Paulo in late 2017, but Cachoeira failed to pass a drug screening.

“It’s three completely different moments,” she said. After two defeats in UFC, I was looking for my first win and am now more mature and confident. I believe this is the right time to make this fight. Although I moved to America to enhance my grappling skills, it is not the only area that I am improving on. I continue to evolve in my striking too, so I feel prepared and confident to fight Priscila now.”