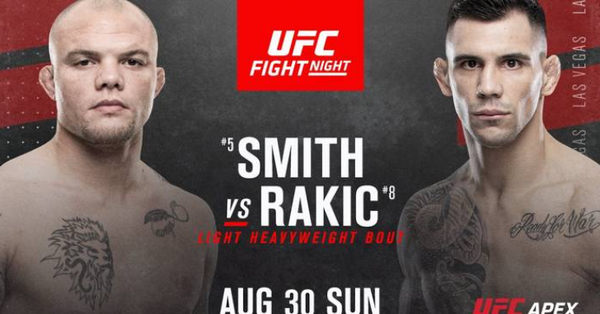 In the main event of the evening, former #5 light heavyweight contender Smith will take on #10 Rakic. Due to the fact that the show lost the original main event Zabit Magomedsharipov vs Yair Rodriguez, the fight between Smith and Rakic ​​will be a three-round fight.

After a failed title run and a loss to Jon Jones, Smith strangled Alexander Gustafsson to be unexpectedly severely beaten by veteran Glover Teixeira in May.

Rakic ​​is also coming back after being defeated. In December 2019, Volkan Ozdemir interrupted the Austrian’s 12-match winning streak, which included 4 appearances in the UFC. Although many people felt that the decision of the judges in that fight was not fair, and Rakic ​​deserved to win more.

Despite his age, 32-year-old Smith is a battered fighter with nearly fifty fights under his belt, 15 of which ended in defeat for him, with 9 knockouts. Perhaps in the fight with Teixeira, we saw the beginning of the decline of the Lionheart. If so, then Rakic ​​has a very good chance of entering the contender pool. Moreover, it is not yet known how Smith recovered from the terrible beating in May.

Rakic ​​is good in the stance, has a powerful punch and a strong chin, he at least does not lose in size to the tall Smith. We expect the fight to be on the stand and Smith will try to finish his opponent in the first round. If Rakic ​​weathers the storm, he can close the defeat on Ozdemir.

Rakic ​​wins by knockout in the 3rd round