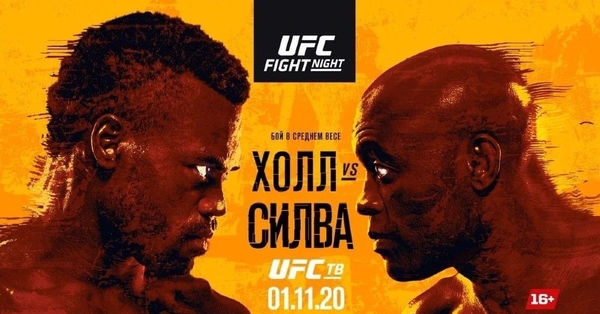 The main fight of the UFC Fight Night 181 tournament

In the main event, middleweights Silva and Hall will fight a duel that was postponed more than four years ago. In May 2016, Silva’s illness prevented their fight.

Former middleweight dominator, longest-serving champion in UFC history, Silva returns after two losses in a row. The 45-year-old Brazilian lost both of his bouts in 2019, losing on points to eventual champion Israel Adesanya and by TKO in the first round to Jared Cannonier. The sports legend has officially won only once since 2013.

Hall, by contrast, is on a two-fight streak, knocking out Bevon Lewis and passing a split decision against António Carlos Junior. The Jamaican has not fought for over a year, because in 2020, due to the coronavirus, his fight with Ronaldo Souza broke down twice and once again against Yoel Romero due to an opponent’s injury.

Silva and Hall are similar in that they both practice a striking style and are the most dangerous in the stand. Silva has always been famous for his well-balanced punches and at the same time he could make an unexpected submission.

However, Silva’s best years are behind him, and the current version of “Spider” bears little resemblance to the peak Anderson Silva. Therefore, Hall may well dominate the fight due to karate skills and eventually extend his winning streak with an early victory.

Hall wins by knockout in the 1st round