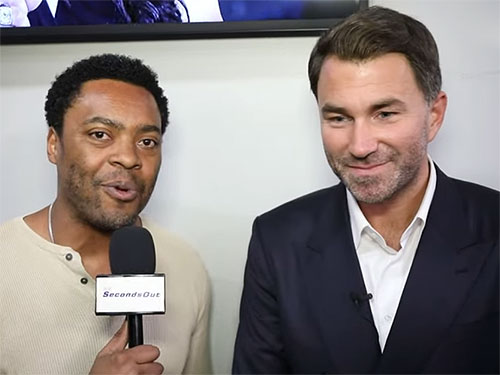 The organizer of the fight between the undisputed champion of the second middleweight (up to 76.2 kg) Mexican Canelo Alvarez (57-2-2, 39 KOs) and the “super champion” according to the WBA light heavyweight (up to 79.4 kg) Russian Dmitry Bivol (20- 0, 11 KOs) Eddie Hearn (Matchroom) gave
interview to an American news portal after the end of the battle.

In a conversation, the British promoter commented on the defeat of the pound-for-pound leader, expressed his opinion about the possible next steps for the Mexican star, and also answered a question about Alvarez’s third fight against the unified middleweight champion (up to 72.6 kg) Kazakhstani Gennady Golovkin (42-1 -1, 37 KOs).

– Almost all the fighters said that there is no option in which Canelo loses. Do you think it’s because he’s had so much success and people have gotten a little misjudged about what’s possible in this ring?

– Not. Because he is the first in pound-for-pound. He is the best fighter on the planet. But what does he do? He obstructs himself by lifting in weight. We all know he’s not a light heavyweight. But he wants to make history, to take on all these tough fights instead of making mandatory super middleweight defenses. We should welcome it, indeed. And now he needs to decide what he wants to do next: get a rematch with Dmitry Bivol or go down to 76 kg and fight at his natural weight. Knowing him, I am almost sure that he will want a rematch with Dmitry Bivol. But obviously it’s too early to tell. Let’s see what happens.

“Respect to all the fighters who continue to take on challenges like Canelo. With that in mind, do you think he learned a bad lesson from Kovalev? He lost that fight according to my notes, but he was able to knock him out at the end. And tonight he also wanted to make a knockout.

– You can’t count it that way. You give him credit for taking on these incredible challenges, and then when he loses, you think he made a mistake doing it. If you want to test yourself, if you want to keep trying to achieve greatness, you will be beaten outside of your comfort zone. And today it led to failure, because Dmitry Bivol was brilliant. It’s not because it was Canelo Alvarez’s fault. Let’s give Dmitry Bivol his due and say that he boxed perfectly tonight. In Dmitry Bivol’s last two fights, there was nothing to show you that such a performance was coming. And he deserves his due from the whole world.

“I didn’t mean the mistake of taking the fight, but I meant his approach to the fight.

– I don’t know. He looked a little monotonous, a little tired from the fight, but I don’t know. Sometimes fighters have good training camps, sometimes bad ones. I think after this performance from Dimitri, instead of trying to find an excuse why Canelo didn’t win, let’s give Dimitri credit for his brilliant performance.

– Certainly. Based on this, if we are waiting for a rematch, what adjustments can Canelo make if the reason for the victory is Bivola? Bivol said that he was comfortable, he was not tired, he liked it. How can Canelo change that?

– As you said, maybe Dmitry Bivol is the favorite in the rematch. When was the last time we saw this? This is a huge fight. But it’s a very, very difficult fight. You never want double defeats. Therefore, Saul needs to lick his wounds and say his answer. But I don’t see how he won’t accept it. It will burn him from the inside. I was in the locker room with him and he’s just depressed. This is always a good sign. Because if he is not suppressed, it means that the end is near. But now the end is not even close.

– This is a good sign for a fighter, but as a promoter, maybe he took on too much of a challenge, he went wrong and now is the time for him to look at another opponent who might be in his weight class? Did you have a conversation with him? Golovkin is still waiting. It’s not like he should activate this revenge.

– It’s true. But at the same time, it will burn him. And it’s not like he needs to protect everything. He fights with pride, and he just got beaten. And any fighter wants to get even for a loss when it seems to him that he should have won. Anthony Joshua is the same. When he fought Andy Ruiz, people said: “Don’t take revenge with the next fight, you’ve been dropped 5 times.” But he came back and won. Tendril. “No need to take revenge with him.” But he activated the revenge. This is what fighters do. He will decide, no one else.

Dmitry Bivol: “Let’s meet Canelo in a rematch for 4 titles”

Golovkin is biding his time. This is probably the only night in his life when he rooted for Canelo [смеются].

“We need to see where it goes. Who knows?

You are also collaborating with him, what do you see for him if Canelo does not activate this rematch?

– He is the unified world champion, a great fighter, a big star. There are many options for Gennady Golovkin. But obviously it was the biggest one.