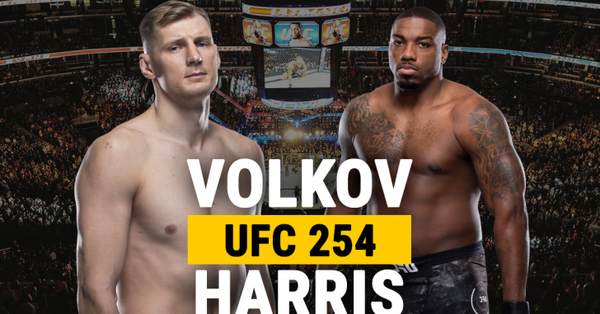 This coming Saturday in Abu Dhabi (UAE) the UFC 254 tournament will take place on Fight Island. The main fan’s attention here will be riveted to Khabib Nurmagomedov and Justin Gaethje, but the warm-up fights should not disappoint real MMA fans.

In the third most important fight of the evening, two heavyweights from the top 10 Wolves and Harris will return to the cage.

Volkov has lost two of his last three fights. Two years ago, he was knocked out in the last seconds by Derrick Lewis, who was losing during the fight. The Russian then closed the loss with a home decision victory over Greg Hardy, and in June at UFC on ESPN 11, Drago lost to Curtis Blades on the judges’ notes after five rounds.

In May, Alistair Overeem ended Harris’ streak of three wins by knockout over Daniel Spitz, Sergei Spivak and Alexei Oleinik. In the first round, Overeem survived the knockdown to stop Harris by TKO in the next five minutes.

Harris is very dangerous on the stand, a true puncher. But how will he perform against a skilled striker? Volkov is great at using his long limbs and can keep his opponent at bay with jab and kicks. In addition, Volkov has a huge advantage on the ground.

The more primitive fighter Harris can win the fight if he delivers an accurate big blow to Volkov’s not very strong chin. But the Russian in this pair has more opportunities to win.