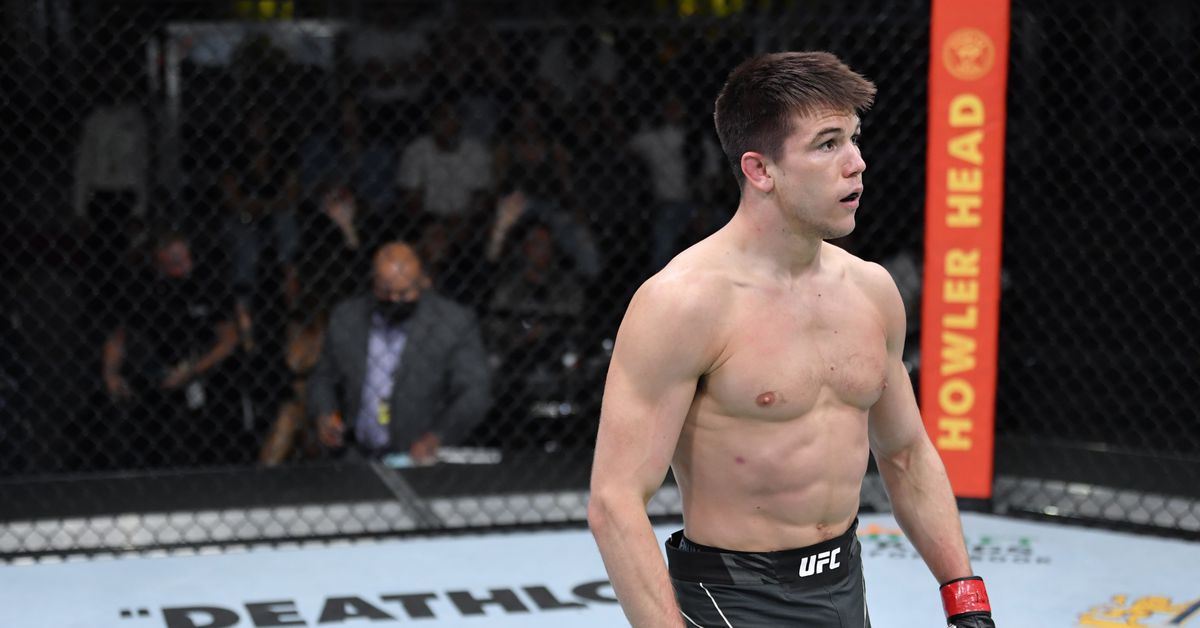 Alexander Hernandez has been a bit frustrated in regards to the frequency he’s been able to compete, and while he has an opponent that gets him excited ahead of this Saturday’s UFC 271 event, he’s not thrilled about when the fight is taking place on the card.

Hernandez will take on Renato Moicano in a lightweight bout at the Toyota Center in Houston, Texas — which is less than 200 miles from his hometown of San Antonio. The fight will take place on the ESPN+ early prelims, which is something “The Great” is not too thrilled about.

“Man, I’m fired the f*ck up because of the amount of disrespect that the UFC is showing me on this card,” Hernandez told MMA Fighting on the We Got Next podcast which comes out Thursday. “We have to wait four months and then I’m on the early f*cking prelims. That incites me to such anger that I want to speak out. I’m so fired up about that. It’s so frustrating and so motivating. I want to be a leader .”

Following his first-round KO win over Mike Breeden at October’s UFC Vegas 38 event, Hernandez told MMA Fighting was hoping to get a quick turnaround and get one more in before the end of 2021, no matter how short the notice would be. Not long after, the 29-year-old was booked against Moicano for a fight over three months later.

Hernandez admits there was a decision that needed to be made: take a fight in February with a name like Moicano — who has shared the octagon with the likes of Jose Aldo, Chan Sung Jung, Brian Ortega, Calvin Kattar, and Jeremy Stephens — or decline in hopes of getting that short notice return. After weighing the pros and cons, Hernandez chose the former, and once the bout was announced for the UFC’s first visit to Houston in 2022, he was happy with the decision.

That is, until the finalized UFC 271 fight card was revealed.

“I am in my state. I’m almost in my city. Derrick Lewis is the other man [from] there [fighting outside of the early prelims]. He’s rightfully the co-main, Hernandez stated. But how did I manage to get through the prelims, the very early ones? It’s not even the prelims. Not on the main card, not on the [ESPN] prelims, it’s my peers that are barely above me, or people that are statistically below that are above me [on the card]. I’m frustrated, plus we’re in Texas.

“I’m gonna go out there, please the 15 people in the audience, get my 20-30 homies hyped. I’m gonna take out Moicano and make a statement and let them know that not to discredit, or disrespect me like that again. I’m so fired up about it.”

After an eight-fight stint at 145 lbs,

Moicano makes his third appearance at lightweight. The 32-year-old began his 155-pound tenure with a 44 second submission of Damir Hadzovic in March 2020 before suffering a KO loss at the left hand of the surging Rafael Fiziev at UFC 256. Moicano bounced back with a second-round submission win over Jai Herbert this past June at UFC Vegas 30.

For Hernandez to get back into the top-15, he’s well-aware he needs to string together victories. Now training at Factory X, Hernandez plans to show Moicano a complete version of himself as a fighter in lieu of getting on a winning streak in the UFC for the first time since 2018.

“It will be just like the Nate and Nick Diaz stuff. That pop, pop hit him with some good s*t, miss some bad sh*t and end the fight one side or another,” Hernandez said. It’s both an open book, and it is empty water when I go .”

Fury: ‘Winning over Klitschko was my curse’