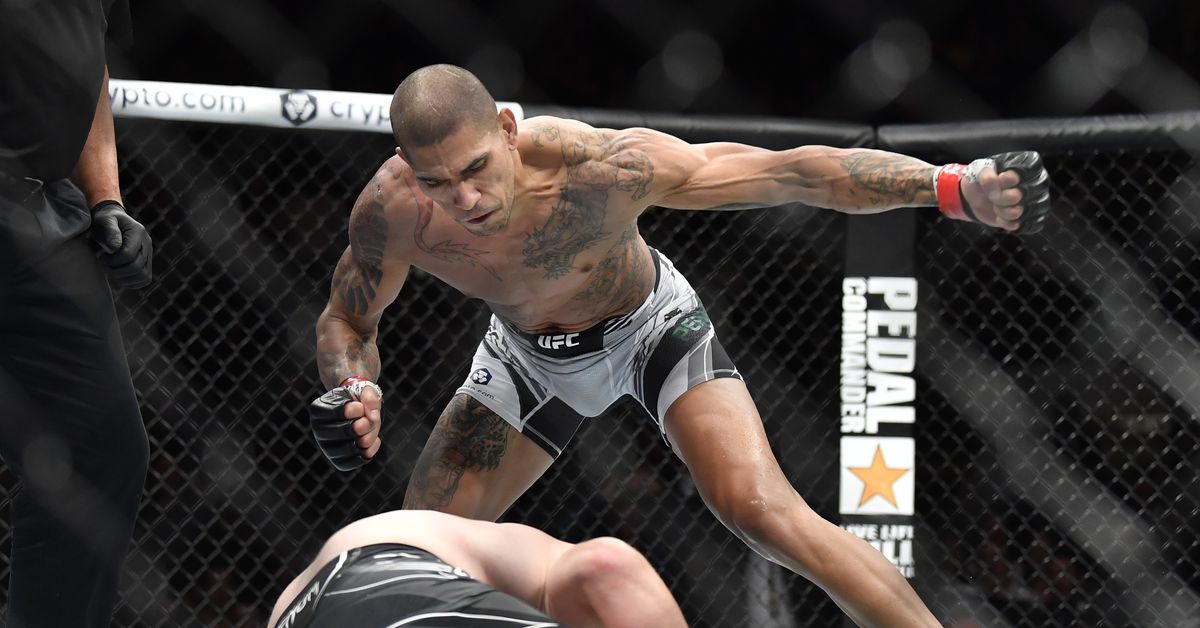 Alex Pereira is not big on doing interviews, but opened up in a recent interview with MMA Fighting podcast Trocacao Franca ahead of his return on Saturday at UFC Vegas 50.

The former two-division GLORY champion accused UFC middleweight king Israel Adesanya of being “scared s***” of facing him under MMA rules after already losing twice in kickboxing, and made sure to respond to comments made by Daniel Acacio and Andre Dida, the coaches of UFC Vegas 50 opponent Bruno Silva.

Acacio, a PRIDE veteran, told PVT that middleweight contender Jared Cannonier has heavier hands and poses a bigger threat to Adesanya than Pereira. Dida also commented on an Instagram posting, saying that they wanted to make Pereira mad.

“It’s their athlete and they want to boost his moral, but I hope they are saying that and then telling Silva to stay alert against me,” Pereira told MMA Fighting. He’s misguiding him.” He is misguiding him .”

Pereira scored 21 knockouts in 33 professional kickboxing wins before retiring in the sport in recent years to pursue a future as a UFC middleweight contender. He has had some brutal finishes while on his journey. Silva is more experienced in MMA — 22-6 in the sport with a 86% knockout rate — but when he announced the matchup on his Instagram, Silva wrote that he was “on my way to my 20th knockout,” which baffled Pereira.

Acacio is a veteran of 50 MMA bouts, and Dida competed in 11 MMA fights as well as dozens of Muay Thai contests, including a clash with Buakaw Por Pramuk at K-1 World Max in 2009.

” Some coaches won’t take you through [in-fight] situations but Pereira spoke of Dida. People sent me this fight. He knocked the guy down. He only won the round because he knocked him down, but he got beat up after that. He got beat up in the second round, and got beat up again in the third. Another beatingdown in the extra round. [Buakaw] won this fight.

“That knockdown counted a lot, but, f***, he got beat up badly. [Silva] may win against me. It’s cool. But it is not what people think. I’m telling you, man, sometimes a coach ruins the athlete.”

Pereira isn’t sure why Silva and his team are talking in the way they are, but thinks it “undoubtedly” adds more pressure upon Silva to deliver at UFC Vegas 50.

“I think he might come with this mindset of trading with me, but it will depend on how I behave in the fight,” he said. “People underestimate my ground [game] a lot, they don’t know how I’m training. I didn’t have to show anything yet. If it’s necessary, I will. I’ll tell you this, maybe it’s more comfortable for [Silva] to fight me on the feet than on the ground.

“A fight is a fight, everything can happen, he might land a hand and I go down. He is strong, well trained, and physically fit. However, if you look at my numbers and compare them to his, it’s clear that I am more dangerous.

“I’m sure that if he was completely honest after [the fight], he would say I’m the most awkward fighter he’s ever faced in his life. Technically awkward, not understanding things [I do].”

Pereira also made sure to weigh in on comments Silva made on a recent episode of Trocacao Franca, in which Silva said he doesn’t like to be friendly with potential opponents because he gets emotional.

” You train hard, go through all the things you have to do, and then, f*ck! Someone greets you, and everything changes.” Pereira stated. It’s not something I agree with. I don’t think that’s being emotional, I think that’s being insecure. With all due respect. I had that. He doesn’t seem to be able to distinguish between insecurity and emotion. I was insecure back in 2011 when I made my professional debut. How am I going to train and do everything I do and let it all change because someone is polite to greet me? Are you nuts? That’s insecurity to me. He’ll see that one day.”