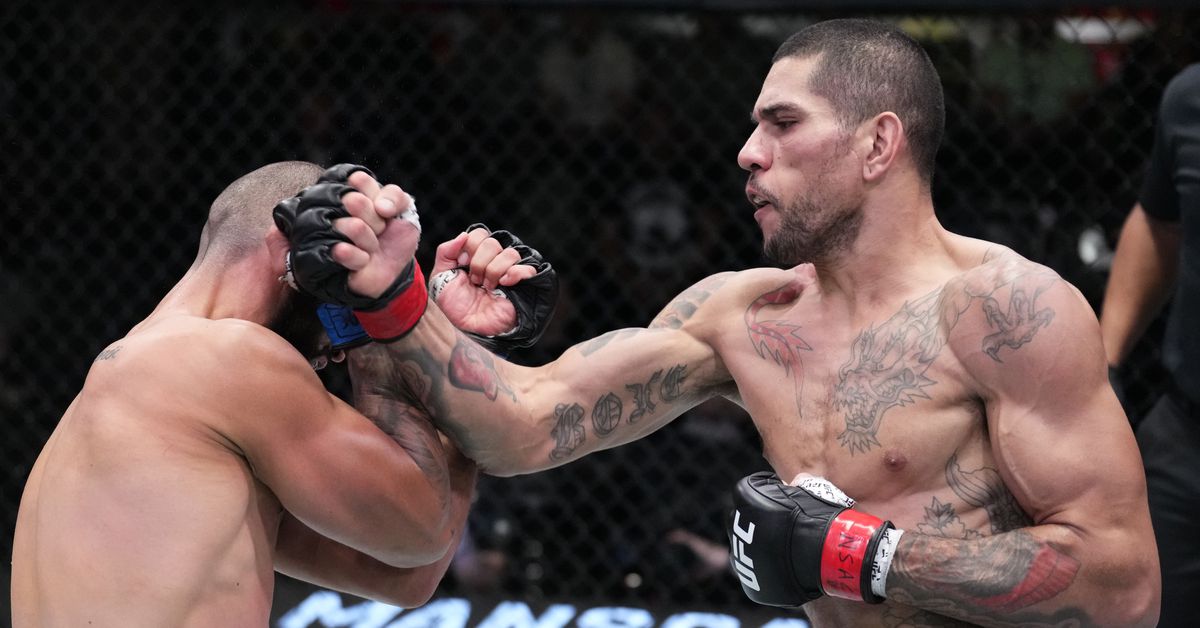 There’s no doubt Alex Pereira can leave any man unconscious on the canvas in an MMA fight. At UFC 276, however, he wants to make a different kind of statement.

Set will return as a possible No. 1 contender bout against Sean Strickland on July 2 — the same night Pereira’s noted rival, Israel Adesanya, is expected to defend his UFC middleweight title against Jared Cannonier — “Poatan” is out to dominate.

“Honestly, I’m not thinking about a knockout,” Pereira said on this week’s episode of MMA Fighting podcast Trocacao Franca. “If it’s a fight [that ends] by decision, winning clearly, I’d prefer it. You know I feel . I’m going to fight him down, and then get back up, so if he gets me taken down, I might also take him down. If I get taken down, I’m getting back up and maybe taking him down as well.”

Pereira is a former two-division champion in GLORY who walked away from kickboxing to focus full-time on his MMA career in 2021. After going 2-0 in his first two UFC bouts, including a spectacular flying-knee knockout of Andreas Michailidis in his octagon debut, Pereira could earn a shot at the title with a win at UFC 276. That holds even more true if Adesanya emerges victorious against Cannonier, as Pereira has defeated “The Last Stylebender” twice in kickboxing and the two continue to have a fiery rivalry.

Strickland, on the other hand, is gunning for his chance at UFC gold after winning six straight bouts, most recently in a five-round decision over Jack Hermansson.

“He’s a dangerous guy, very tough,” Pereira said of Strickland. “But, with my fighting style, I think it’s a great fight for me. You know he is willing to fight. He wants to win. This motivates me greatly. I think my technique could be better than his.”

Pereira is only a blue belt in Brazilian jiu-jitsu and believes Strickland will “insist” on approaching the fight with takedowns in mind. The former kickboxing star said he may also showcase his own grappling acumen, but only when it’s not just a “waste of energy.”

” I see many opportunities in his game. There are so many things I can do there,” Pereira said of Strickland, who hasn’t lost since a first-round knockout to welterweight Elizeu Zaleski in 2018. “Even that fight he lost to the Brazilian with a spinning kick, he’s getting a lot of experience since. Perhaps it was not just the fact that he gained weight. I believe he is evolving. Six fights [since then] is a lot, you know?”

In a previous interview with Trocacao Franca, Pereira said Adesanya was “scared s***” of facing him in MMA and predicted the champ would run from him.

” I don’t know what [after UFC 276],” Pereira will say. Since I signed [with the UFC]., people have asked for Adesanya and title fights. He was there when I arrived to say that I would fight for my belt against the current owner. I don’t know how it’s going to be, but I’ll be ready for one, two, three, how many more fights the organization wants me to take. It’s a fast process, but we can clearly see that it is. I’m ready [now].”

Will Adesanya leave the T-Mobile Arena in Las Vegas as the reining 185-pound king, though?

Pereira believes it’ll be tough for any middleweight other than him to beat the UFC champion at the moment, and he broke down exactly how he thinks Adesanya will defeat Cannonier.

“What will make the difference in this fight is the kick to the thigh,” Pereira said. “[People will say,] “But Alex won by head kickKO or a knee.” But, look at the beginning, and how [Cannonier] behaves after those kicks. It’s hard to hurt someone with the hands. It’s not easy to KO someone with your hands. You are supposed to hurt.

“What is Adesanya is going to do [against me]? Kick me? I’ll defend it. It hurts people too. That’s what he does well. He hurts people. You can still see the people he has fought. [And people] will never talk about this kick [to the thigh].”