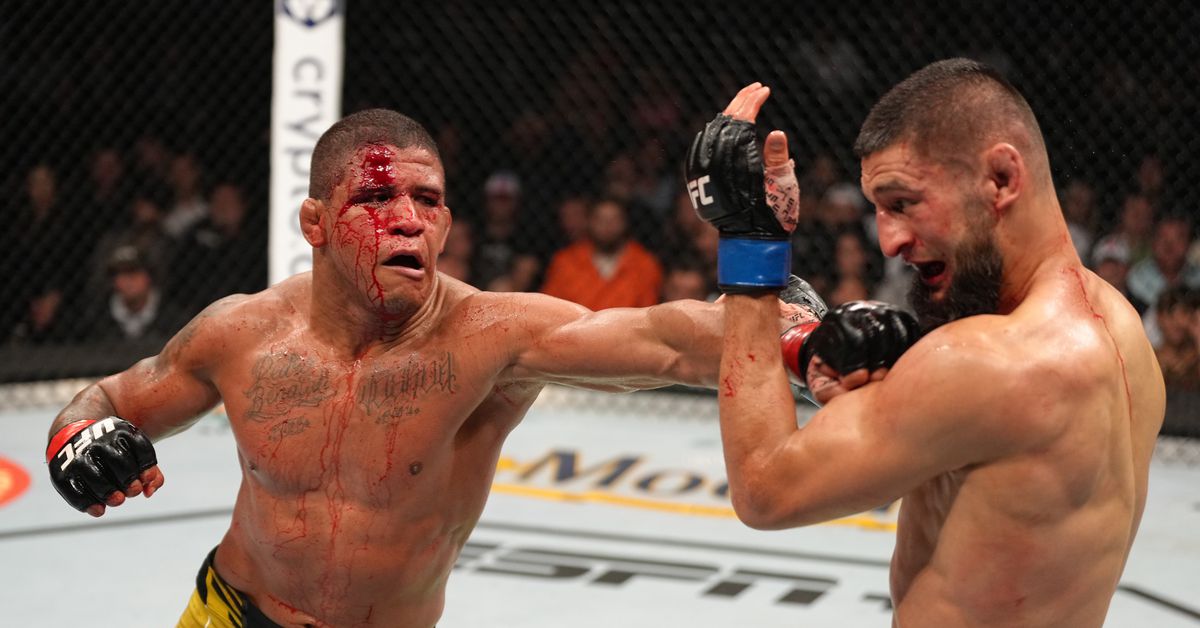 When Gilbert Burns received his contract for the fight against Khamzat Chimaev at UFC 273, he only had one question in his mind.

“I inquired [my manager] Ali [Abdelaziz] if he wanted to fight for three rounds. Burns replied to MMA Fighting. “No, I’m fighting this guy.’ I’m giving him a courtesy. You’re the No. 2 [ranked] fighter, he’s No. 11. I need five more rounds. It didn’t work .”

According to Burns, he accepted Chimaev’s fight. He also sought the bout against the fighter who was suddenly deemed the most dangerous prospect in the welterweight division. He had no problem with the timing for the matchup or where they were at on the pay-per-view main card but Burns wanted to truly test Chimaev and that was going to require 25 minutes.

“I asked it, and I requested it several times. Ali [did], also requested it,” Burns stated about the five-round bout. “I don’t know if because of the two title fights maybe, I don’t know. I didn’t get an answer. It’s clear to me that we have to go back. It’s got to be five rounds next. A lot of respect to Khamzat.

“I don’t think I can take anything away from him. There is no reason. I went into a battle. My heart is there. The guy hurt me a couple of times, I kept moving forward. He keeps trying to hurt me. He is a good guy. Every time we go to these fights, we leave a piece of ourselves in there but I knew that going into this fight, this guy would be very, very tough. Not the monster — no way that guy would have an easy fight and finish me in the first round — but he ended up getting the win so I have to give a lot of respect to this guy.”

Despite only having three rounds to work, Burns gave Chimaev everything he could handle while blasting the undefeated prospect with a number of hard shots that left him rattled.

All three judges ultimately scored the fight 29-28 in favor of Chimaev and while Burns believes he could have walked away with the victory, he’s not screaming about some kind of injustice done to him just because he didn’t earn the decision.

“I watched the fight a couple of times,” Burns said. “A lot of things that I trained I didn’t do, as in training. I should have thrown a little bit more calf kicks and whenever he switched stances, the right kick was there. There was so much going on. Although I couldn’t move my head, I thought it was an excellent performance. It was a great show. I think he was very tough, too. He won the first round with the little knockdown that I had. A freaking knockdown, the guy changed southpaw, that happens sometimes when they change southpaw. He made me eat the jab, which was very difficult. The second round was my win and I felt that I had thrown a lot of bombs during the final round.

“[I’m not angry] I thought I had done enough [to win], but it was a bit crazy because I didn’t accomplish a lot that I wanted to. But I thought it could go either way. I thought I threw the hardest punches. I was loading up a lot of punches, throwing a lot of big shots on the guy. Khamzat is hard to ignore. It was close .”

The back-and-forth slugfest earned the welterweights an extra $50,000 each for the Fight of the Night at UFC 273 and it’s hard to imagine that battle won’t end up as one of the top fights for all of 2022.

While he wasn’t feeling robbed, Burns feels that he still has some business to do with Chimaev. He wanted an end to their relationship and neither one got it.

“The way I see it right now, we’re not done,” Burns said. “Me and Khamzat, we have to see each other again. I give him a courtesy. I’m waiting for the courtesy back. He is moving forward. I am aware that the UFC would like to have the Colby [Covington] match but it’s not over. I want to fight Khamzat again.

” I think that judging a close fight is a bad idea. I’m not a judge. Although I tried to throw a lot at him, I feel that we are not finished. We’ve got to get that one done. Someone has to go down. Five rounds, seven rounds, someone has got to go down next time.”

After the fight, Chimaev paid tribute to Burns. He had been in war in the Octagon together. However, he didn’t turn down a request to rematch.

“In five rounds, I will take your soul,” Chimaev wrote on Instagram. “See you soon, boy.”

Burns didn’t really feel the need to take anything away from Chimaev based on his performance at UFC 273 but he knows whether it’s the next fight or a year down the road, they will meet again.

“I have a ton of respect for every opponent that I have, that I will have. I believe these guys are all fighters. You can say whatever you want but at the end, you’ve got to show respect. We’re both freaking gladiators. We are putting everything on the line .”

There are no guarantees: Will Stephen Thompson, the “Wonderboy”, defeat Kevin Holland in UFC Orlando?