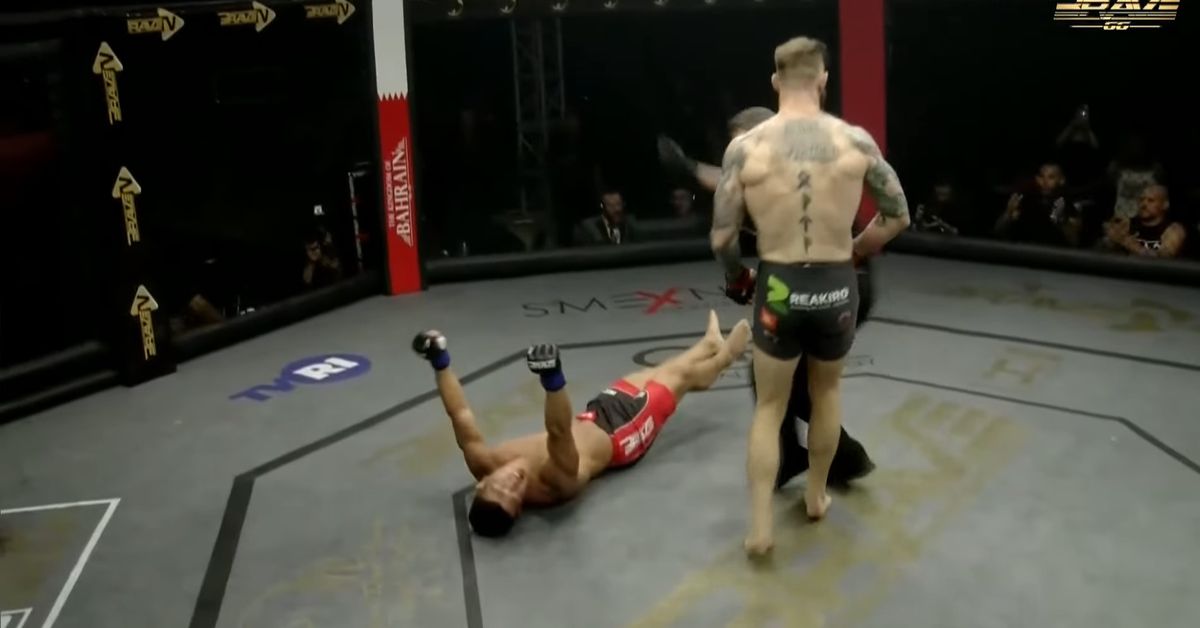 As we enter the final month of 2022, it’s time for us to take a step back from the craziest of the crazy in the MMA world — I’m talking in-cage 3-on-3 grappling basketball and fighters choking each other out with standard auto safety features — and focus on the normal crazy that is two human beings willingly signing a contract to pummel one another.

Consider this week’s collection of highlights a palette cleanser, if you will.

Well, it didn’t stay that long.

Even when we’re focusing strictly on MMA, we still end up leading with this grisly scene from Brave CF 66 in Bali, Indonesia. Chad Hanekom made In Jae La pay for lackadaisical clinch defense as he cracked him right on the temple with an elbow that made La go Full Matua.

“Once again, that stiff arm position, it’s a little alarming to see but it’s not unusual and it’s not a sign of any significant damage,” the commentary assured us. I’m hoping that’s true and that there isn’t any long term damage, but an elbow upside the head like that looks pretty darn significant to me.

I also quite enjoyed Oloan Silalahi just ripping Wilem Natalex Munster off of the cage to finish a rear-naked choke.

If I’m Munster, I’m cheating and grabbing onto that cage for dear life, though knowing my luck I’d probably just end up unconscious with my fingers stuck in the fence. Would be even more embarrassing than getting Matua’d.

Brave CF 66 is available for replay on DAZN.

Hopping over to Iur Fighting Championships 5 in Newry, Northern Ireland, amateur flyweight Kian McCarton scored the submission of the week with a slick flying armbar of Shea Cleland.

Catching up on some #IrishMMA fights from the weekend…

McCarton weathered the storm there and waited for his moment, then made Cleland pay for holding onto his leg for too long. Cleland thought he had a trip, but he inadvertently helped McCarton get halfway into position for the aerial submission. That’s MMA for you.

Free fights from Iur Fighting Championships 5 are available on YouTube.

If Machado’s name sounds familiar, it’s because he was supposed to fight on the Contender Series this past August, but missed out due to visa issues. He’s now won six straight fights, with his past four wins all ending in the first round. He’ll be back on UFC radar very soon.

The sad tale of Cannon Tass’ arms continues in the prelims. Earlier this year, Tass lost his amateur debut courtesy of a Marcus Coward kimura; this time, it was his left arm taking the hit as he had to take a TKO loss when a blocked kick from Lycidas Allen Crow appeared to injure him.

It just sucks to be Tass’ arms, man.

Battlefield Fight League 75 is available for replay on UFC Fight Pass, with the prelims free on YouTube.

The competition was stiff for this week’s Humpty Dumpty Fall of the Week (we’re excluding the Hanekom KO because there’s nothing funny about Matua’ing someone), but our winner emerged from MMA Series 61 (free replay available on YouTube) in Yerevan, Armenia.

Bogdan Guskov blasted Alireza Vafaei with a right hand that left Vafaei looking like he was dropping for a takedown against an invisible opponent.

The stand-over was so incongruous and so cool.

Enkh-Orgil Baatarkhuu landed a dynamite right at a Road to ONE Event in Ulaanbaatar (Mongolia), which saw Bat-Ochir Batsaikhan twisting, shouting, and hitting the mat.

And we can’t talk about one-shot bombs without mentioning Chris Hill’s spectacular effort from an Almighty Fighting Championships event in Barnsley, England this past weekend.

You know it’s a good one when you knock your opponent out of frame.

We don’t get to appreciate great grappling defense enough, but thanks to this excellent clip from @CombatSportsUK, we can give amateur Dylan McGee the spotlight he deserves for avoiding all of the submissions. They all.

Even better, McGee went on to defeat opponent Hayden Baldwin by unanimous decision.

What’s that? Not satisfied? You want to see a 10-second mugging? We’ll show you what is out there.

Free fights from Alash Pride 77 are available on YouTube.

Let’s send it to Wasi Adeshina to take us home.

Look at that precision

I love to watch fighters find their opponent and lock in. This is what Adeshina did here. Adeshina switched the lasers off in less than one minute and finished Robert Nystrom with this stunning knockout.

If you know of a recent fight or event that you think may have been overlooked, or a promotion that could use some attention, please let us know on Twitter — @AlexanderKLee — using the hashtag #MissedFists.