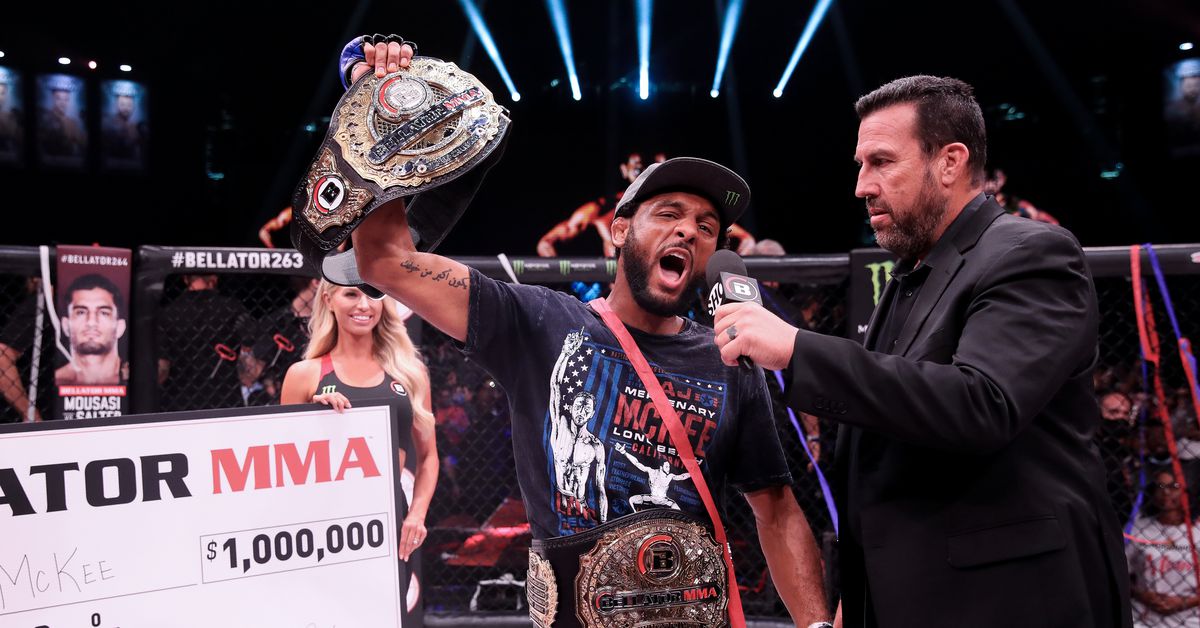 Just days away from his first title defense, A.J. McKee has detailed what Bellator MMA will need to retain McKee as a long-term promoter.

The undefeated 27-year-old featherweight has quickly become one of the faces of the Paramount Global-owned company, but the two sides remain far apart when it comes to a new contract that would keep him beyond his current obligations under a champion’s clause in his current deal.

“They did [try to re-sign me],” McKee said on The MMA Hour. “I had already fought previously for a million dollars. With all the accomplishments I have, I believe I shouldn’t be forced to ever see anything below a million again. Every time I step in that cage, there’s an ‘O’ on my record.

“For me to go backwards, anything under a million, I feel it’s just not reasonable. We were at like [$500K] but it’s not appetizing to me.”

According to McKee, he’ll make $250,000 for his upcoming title defense against Patricio Pitbull, which serves as the main event for Bellator 277 on Friday night on Showtime.

While testing free agency might be appealing, McKee knows he still has quite a bit of time left with Bellator before he can start fielding offers from anybody else.

“There’s been nothing re-signed so currently championship clause, three fights [remaining],” McKee said. It doesn’t specifically specify [how long the contract lasts], so it is normally six months each fight, an year and a a half [left].. A year and a half but I’ve got other things going on outside of that, all kinds of other stuff.”

McKee also noted that he plans to part ways with his current management team at Creative Artists Agency to instead begin representing himself alongside his father, Antonio McKee.

As anxious as he might be to find out his value on the open market, McKee says he’s not against staying with Bellator but the promotion needs to concede to his financial demands or these next three fights could be the end for him there.

“Possibly, if we can’t come up with the million dollars, then yeah [this could be it],” McKee said. That’s also the truth. Every time I fight, my numbers are going to double because I want to be back paid for the fights that I haven’t. It’s business. There are families I have to provide for.

“I look forward to having children of my own someday. This is how my father eats. It’s generation after generation. It’s not a new tale for us. You can’t stop me, but you can slow down me

Of course, McKee’s declaration about his current contract with Bellator and the money he wants to earn in the future could lead to the two sides eventually parting ways.

His potential exit could then give way to a deal with the UFC, which McKee has mentioned as a possible landing spot for several years even before he became a champion in Bellator.

” “It has always been my dream and goal to have a UFC championship title,” McKee stated. “Just as a kid I grew up watching ‘Rampage’ [Quinton Jackson]. That’s my first UFC belt as a child.

“Having a UFC belt is possible. It’s inevitable. It’s an achievement and an accolade that I would love to have under my belt. Being champ-champ there as well.”

McKee has long considered himself the best featherweight in the sport even when compared to the reigning UFC champion Alexander Volkanovski, who is fresh off a fourth-round TKO against “The Korean Zombie” Chan Sung Jung.

If he eventually leaves Bellator for the UFC, McKee would hope to get a fast track to the title but the fight he actually wants most isn’t even the one that would make him champion.

“Maybe, I get that [Michael] Chandler red carpet treatment, come in and beat somebody up in the top three real quick and then go straight into a title fight,” McKee said. “Beat [Alexander] Volkanovski fast one-time, but my dream fight is [Max] Holloway. That’s the dream fight.”