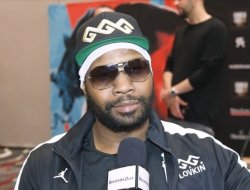 The American mentor of the unified middleweight champion (up to 72.6 kg) from Kazakhstan Gennady Golovkin (42-1-1, 37 KOs) Jonathon Banks gave
interview for a British reporter.

In a conversation, the coach commented on Golovkin’s upcoming third fight on September 17 against the undisputed middleweight champion (up to 76.2 kg) from Mexico Saul “Canelo” Alvarez (57-2-2, 39 KOs). The coach also discussed the performance of the former unified heavyweight champion from Britain Anthony Joshua (24-3, 22 KOs) in a rematch with Oleksandr Usyk and commented on his possible fight against the WBC champion from Britain Tyson Fury (32-0-1, 23 KOs).

– It’s the week of Canelo – Golovkin 3 fight. In a few days the fight will take place. How are you all feeling?

How do you feel as Golovkin’s coach? Are you nervous given the magnitude of the fight and the history between the two fighters?

– The only thing I’m nervous about is how the judges will see this fight? This is the only one. I have already taken part in big fights. My first fighter was a heavyweight champion (we are talking about Wladimir Klitschko, ed.). So when I came as a coach, I immediately went to the highest level in the sport. Everything else after that is just routine.

– How did you evaluate the first two fights between the fighters?

I don’t understand how most of the judges saw Golovkin lose 9 rounds. This is amazing for me. A blind cat would have seen that he won more and that he did not lose 9 rounds.

How will you perform with Golovkin so that he doesn’t run out of steam trying to stop Canelo, or so that he looks dominant enough that the judges clearly see the victory?

– You can not pay attention to the judges, because in this case there will be too many opponents in the ring with you. The goal is to focus on your strategy, focus on your opponent. Just recycle your opponent. It’s minimum. We just go out there and rework our opponent – and this is the minimum to become a winner.

– Golovkin’s age will play a role, in your opinion?

“If people think so, then I guess people are right.

– And what do you say about people’s opinions?

– How much can Canelo’s psychology be affected by losing the fight with Bivol?

– He’s a fighter. Fighters don’t live in the past, they live in the future. He just wants to win. That’s all. Like everyone else, he wants to win. No matter what happens in our fight, he will still want to win in future fights. There are guys whose confidence is unshakable. I think Canelo is one of those. No matter what happens, confidence will not change. He is who he is. And he will always be like that.

— How important is the legacy for Gennady in this trilogy, in this historical trilogy?

Don’t get me wrong, yes, he wants to win. Yes, it will be the main part of his story, but in the end, in the ring, he will not think about his legacy. He will think about his victory. No matter what he does, he can be satisfied with his career. And the public says that you can do more. Legacy is a matter of public opinion. As for Gennady, he must satisfy himself first of all on Saturday night. It’s not about the others here, because it doesn’t matter what happens in the fight for the two fighters when they get home. They can return as fathers, husbands, be loved, if they already were. It won’t affect the outcome of this fight.

“Of course you won’t tell your strategy…

How likely is a knockout?

– We have two fighters who have not fallen to the canvas before. What is the probability that either of them will lose by knockout? Really. If you really understand this – two fighters never fell to the canvas. If any fighter falls, it will be the first time. History tells us that 9 out of 10 times a fight will not end in a knockout. This will be a full 12 round battle. This will be a war.

“I want to switch to Anthony Joshua. How likely is it that we will see a fight against Tyson Fury and who do you think will win?

— It’s hard to say. Depends on who’s in Joshua’s corner. This is my honest opinion.

– If it’s Robert Garcia, how will the fight go?

“Maybe, maybe not. It’s better to say: “No comment.” Do not misunderstand me. I have nothing against Robert Garcia. Garcia is great, that’s my opinion. Great dude, amazing coach.

– In the fight between Joshua and Usyk, could Joshua have performed better from the point of view of the coach?

“I just think he has great ability, great talent for boxing. He doesn’t want to stop boxing. He showed small signs when he started to work on the body, to go forward. And I’m sure he shook Usyk because Usyk stopped throwing punches. But Joshua also stopped. He didn’t continue. I think that he did not reveal his talent enough. It’s my opinion.

Given what has been said, how do you see Fury vs Joshua going?

– I think it will be like a fight with Usyk and Joshua. The difference will be that Fury will move a little more. I think Joshua can catch Fury more times than he has Usyk because obviously Fury is much bigger, he has a lot more punching area. Clearly Fury is a bigger target to hit. But Fury is a damn good boxer. If it’s kryptonite for Joshua, how will he handle it? I dont know. Depends on how he handles the boxer. This will be a good fight. It might be a great fight, but Joshua is skilled enough to take on any fighter. Who will win? I have no idea.