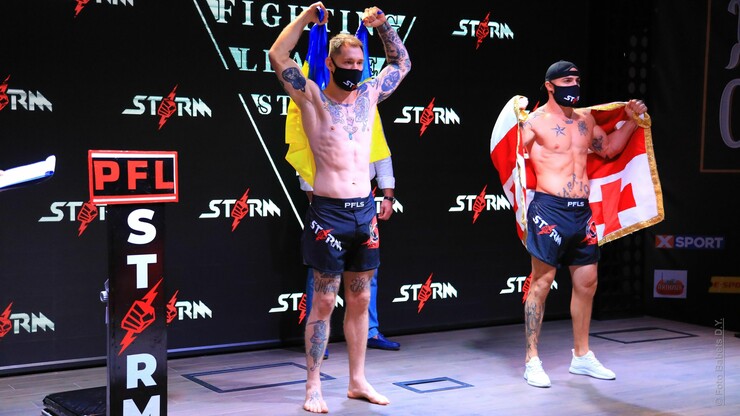 For the first time in Kremenchuk, the international MMA tournament “Fighting Night Storm” was held

A mixture of adrenaline, excitement and the joy of victories – on September 18 it was really hot at the Iceberg ice arena in Kremenchug. The best MMA fighters from Ukraine and other countries met in the ring in fierce fights.

The first two clashes ended in technical knockouts, then the fighters began to warm up the audience even more and demonstrate outstanding skills and the will to win: quick punches and kicks, grabs, pain and suffocation techniques.

However, the real color and highlight of the tournament were 5 impressive main fights in the Main card. It was in the main fights of the evening that Ukrainian fighters competed against the strongest representatives of MMA from around the world, showing the Ukrainian school and the will to win.

So, Ukrainian Maxim Pashkov lost to Rasul Tezekbaev from Kyrgyzstan – 3 rounds, unanimous victory. However, the Ukrainian fighter definitely turned on the heat in the octagon and did not let his opponent down.

Roman Golovinov from Kharkov lost to Dmitry Gritsenko from Kiev by unanimous decision.

One of the brightest fights of the evening was the fight between Georgy Tabatadze from Georgia and Robert Vorobyov from Ukraine. And if from the first seconds of the meeting it seemed that the advantage was on the side of the guest from Georgia, then at 3 minutes and 33 seconds the Ukrainian chose victory by choke hold.

“In fact, the plan was to cut in the rack. After the first missed, I thought, hell with this plan, I can fight, ”Vorobyev said after the victory.

In the heavy category, Serb Adnan Alic could not overcome the Ukrainian fighter Alexander Pysanko – a technical knockout.

It should be noted that on the eve of the tournament, the President of the Professional Fighting Legue “Storm” Sergey Pomazunov said that such tournaments are planned to be held systematically.