WMMAA   /   News   /   Meet Tomas Yu, WMMAA Vice-President World MMA Association (WMMAA) vice president Tomas Yu, of Albuquerque (NM), who is also president of the WMMAA Pan-American division, took time from his busy schedule to address questions about his MMA background. Can you tell us about you and your experience in Martial Arts? TY: “I’m from the generation that grew up watching 3 Ninjas, Ninja Turtles… I wanted to be a Ninja!  I grew up practicing Tae Kwon Do in Mexico, all the way to my black belt. At age 18, I ventured to practice Aikido and Judo in El Paso, Texas. I loved learning and I always wanted to be a rounded student, which is why I always looked for different arts to offset the weaknesses of the other.” How did you first enter the world of MMA? TY: “I was really looking for a place I could introduce my daughter to Martial Arts. I was looking for a more rounded self-defense Martial Art but not a fight club. I was introduced to the sport of MMA by a good friend and pioneer of the sport, Chris Luttrell.  I was immediately bonded to the sport, since that is what at one point all Martial Artists are looking for.” 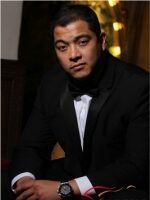 When did you first hear of MMA and what was your first impression? Did you expect this sport to grow as much as it is now? TY: “I have been privileged to see the evolution of MMA since 1993 as a teenager, all the way to now, becoming the first Pan-American Division President in the most important Regulation Organization for MMA in the world.” What is your function and main activities within WMMAA? TY “My biggest function is to introduce simple business principles to the sport of MMA and keeping Martial Art in MMA. What I mean by that is, the common denominator for every individual Marital Art are (Respect, Loyalty, Honor) and the mixture of martial arts should not represent what people perceive MMA is today. It should be a mixture of Respect, Loyalty and Honor. It should be a much more admired sport.” How would you assess WMMAA’s progress during its three year existence? TY: “Well, as an entrepreneur, I’m never satisfied, I always see ways to do things better but the reality is that, in the 25+ years MMA has been evolving and becoming not just a mixture of Martial Arts but also a true blue sport. Many people have tried to add value to the sport with no real success until this past two years with the WMMAA.” What are the main goals of WMMAA and what are the main obstacles for the association? TY: “This question has a long and complicated answer! The number one obstacle is pride, pride to admit that past performance or formulas to add value didn’t and won’t work. Pride to admit that working together will pave a new path.  The number two obstacle, is UNDERSTANDING, understanding the big picture, like Micro and Macro economics really being two different worlds. “The sport or art of MMA is much more than what we see on television. There is a much deeper impact to society than pay per view.” How do you assess the third World Championship that took place in Prague? TY: “Moments like these are the ones that 3 years ago we would dream about.  Well, last year that dream came true… over 40 countries participated in the beautiful city of Prague.  I can’t explain the clash of emotions when you see and hear country after country being announced as they walk into the arena with their head held high as they carry their national flag. We as an organization created Continental Presidents to be able to perform better follow through and also be more sensitive negotiating in different cultural environments. Our Europe and Czech Organizing Committee did a wonderful job. Were there any countries that stood out or surprised you? TY: “The fact they were there, that’s what really stands out! Some countries were participating for the first time. The level of mental competition for some countries was amazing. I can’t wait for the 2016 World Championships.” What are the 2016 mid-term goals for WMMAA Pan-Am? TY: “The number one focus for PANAM is the roll-out of our new initiative on ‘Global MMA Officials and Licensing’ to standardize the sport worldwide, but also standardize the officials looking out for the sport.” Can you describe what 2015 was like for WMMAA?  TY: “2015 was a year of foundations, recruiting, and preparing for the volumes of growth coming our way this year.” What words of wisdom would you like to share with the members of WMMAA family? TY:  “I have always said that in every sport there is a business behind it, believing: ‘Till this far, MMA is like Capital… it goes where it is welcomed and it stays where it’s treated well'” WMMAA keeps expanding. However there are still multiple countries that are not yet WMMAA members. Why should any local Federation apply for WMMAA membership? TY: “We are the only organization of its kind. They would be able to get courses, national and international licenses but, most importantly, they can be part of history by allowing athletes in their respective countries to participate in our version of the Olympics of MMA.” What would you tell them? TY: “You are not alone.  Here is where being part of a team with qualified individuals opening door. Power really does come in numbers.” People keep asking: why should we use SportID and SportData. Can you repeat why it is so essential? TY: “I’ll keep it short. The number one reason – reason enough – is to avoid private owned companies from having biased control on who and how they upload information.” www.facebook.com/World.MMA.Association